Blog tour: ‘Calvin Sparks and the Crossing to Cambria by ’Rusty Anderson 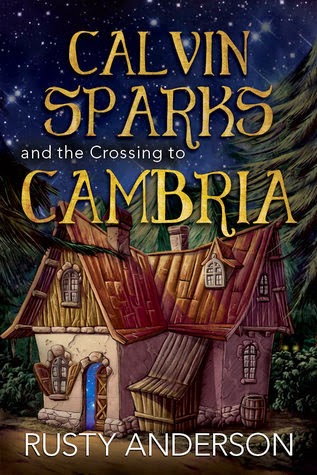 About the book:
When Calvin discovers a mysterious cabin in the woods, it seems like the world’s coolest clubhouse! But there’s more to this place than he knows. Hidden inside the cabin is a portal to another world, and Calvin’s not the first person in his family to use it. Filled with action, adventure, mystery, and magic, this story is sure to entertain kids and parents alike.


About the author:
Rusty discovered his passion for writing at an early age. When he was in the fourth grade he was given an assignment to write, illustrate, and bind a book. He liked it so much, he wrote three––most of which were pretty awful. One of those books, however, received accolades at a district writing competition.
Originally from California, Rusty is no stranger to apple boxes and packaging tape. He attended three different middle schools and two different high schools between California and Utah. He lived in Guatemala, learned to speak Spanish, and eventually made his way back to Utah, where he graduated from the University of Utah. Rusty was the editor of a monthly Utah newspaper and currently pays the bills doing graphic design and marketing.
On the weekends, Rusty stays up late playing games and watching movies with his family. He and his wife, Jayne, reside in the beautiful mountains in Heber Valley with their six children.


My review: Calvin Sparks and the Crossing to Cambria by ’Rusty Anderson

I read Calvin Sparks and the Crossing to Cambria and did not want to put it down. It reminds me a little of Harry Potter, Percy Jackson or Ranger Apprentice type of story.  It is full of magic, adventure, dragons.  Three friends are exploring the woods looking for a magical place. They find it.

Calvin Sparks lives with his mom & grandfather.  His father was killed.  He is special.
Anna is special too.  She is adopted and has overprotective parents who want her to have more girl friends.
Perry is more timid than his two friends. He is a good friend though.

Cambria is a different kingdom through magical portals.  There is a great battle of good versus evil.
There are six powerful objects that will make the holder immortal.  Each object brings more power and a thirst for more powerful.

Galigore already has two items.  He has corrupted many to his side. His forces killed Calvin's father.

This is a clean read that anyone can read and enjoy.  That has lots of action, drama, discovery, trials and making choices.  They all have to make choices.

Some of the twists and turns I was expecting others took me by surprise.  I want to read the next book and see what happens next.

I was given this ebook to read and in return I agreed to give honest review and be part of Calvin Sparks and the Crossing to Cambria blog tour.