Where Secrets Sleep by Marta Perry 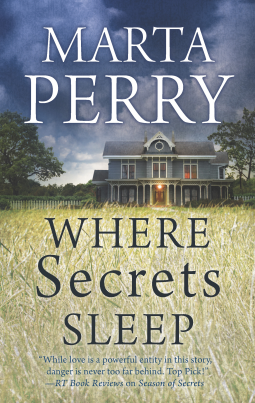 In Amish country, not everything is as simple as it appears

After a terrible betrayal, Allison Standish flees Philadelphia for the small Amish village of Laurel Ridge to claim an unexpected inheritance. Allison intends to sell the mansion housing various shops on Main Street—until she meets Nick Whiting, a single father and tenant of Blackburn House, who challenges everything she believes about her estranged grandmother and the Amish community.

Strange stipulations in her grandmother's will soon bring distant relatives and seething townsfolk to Allison's door. As anonymous threats escalate, Nick grows protective of Allison, and she finds herself falling for the handsome carpenter… But then she discovers her grandmother's death may not have been accidental, and someone wants Allison gone. Permanently.
My review: Where Secrets Sleep by Marta Perry
4 STARS
Where Secrets Sleep is a clean suspense, romance Amish story.  It grabs you right from the start. There is plenty of characters that I want to see more of. This has Amish characters but the main characters are not.
Allison Standish has just inherited a building in Laurel Ridge.  It has strings attached to it.  She has never known her grandmother and was surprised that she was left something.  She has to manage the building for a year at a profit then she will own it with no strings.
Allison just found her boss and boyfriend together right before she left to see what she was left.
Something is going on in her building.  People don't want Allison to stay and keep the business.
Nick Whiting and his father own one of the business that is in the building. Nick and Allison got off to a rocky start.  Nick is a single father and has moved back in with his family.  He is not sure if he wants her to stay.
Laurel Ridge is a small town. It has a Amish community as part of it.
I would love to see more stories in Laurel Ridge.  I hope Mac and Sarah both get books. I was not ready to put the book down. I want more of Laurel Ridge.
I was given this ebook from Net Galley and Harlequin to read and in return agreed to give honest review of Where Secrets Sleep.
rhonda1111 at 2:33 PM
Share