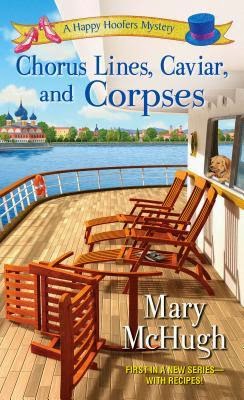 First In A New Series--With Recipes!

There's no pussy-footing around murder . . .

It's never too late to kick up your heels. Just ask Tina, Janice, Pat, Mary Louise, and Gini--aka the Happy Hoofers. After posting a video of their tap-dancing routine on the Internet, the leggy ladies find themselves booked to perform on a Russian river cruise up the Volga from Moscow to St. Petersburg.

But when murder cuts in, the five fabulous friends find it's not so easy to tap their troubles away. A crew member has been killed, and a passenger is missing. With a killer on board, the Hoofers need to watch their step. But with a little fancy footwork, these soft-shoe sleuths may get a leg up on a killer who's cruising for a bruising. . .

This is the first book in a fun new series about 5 middle age women who are dancers.  This is exciting, murder mystery, lots of action, travel in Russia on a river cruise. I really liked the characters.  I am already starting to read the next in the series.

The Happy Hoofers are Tina, Janice, Pat, Mary Louise, and Gini.  Tina is the leader and the main character for the Chorus Lines, Caviar and Corpses.  The ladies are good friends and a little bit of everything. Their dancing was put up on the internet they were invited to dance on a cruise.

The Russian cruise was not what they expected.  The cabins were crowded, the food was terrible, the chef was murdered.  They made some good friends too. Lots of humor about British chefs.

The setting was on the Volga river from Moscow to St. Petersburg. It made the sites tempting to go see.

The mystery was good I did not guess who the murder was. Tina was attacked and used her brain to get away from him.
I liked the Happy Hoofers and want to see more of them in the future.
I bought this ebook on Amazon.
rhonda1111 at 10:49 AM
Share