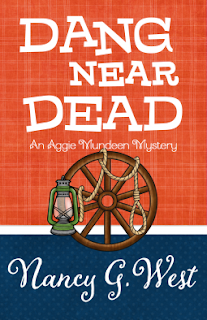 A SATISFYING MYSTERY WITH COMPLEX CHARACTERS…

Aggie vacations with Sam and Meredith at a Texas Hill Country dude ranch with plans to advise her column readers how to stay young and fresh in summer. Except for wranglers, dudes, heat, snakes and poison ivy, what could go wrong?

When an expert rider is thrown from a horse and lies in a coma, Aggie is convinced somebody caused the fall. Despite Sam’s warnings, Aggie is determined to expose the assailant. She concocts ingenious sleuthing methods that strain their dicey relationship as she probes secrets of the ranch and its inhabitants. After she scatters a hornet’s nest of cowboys, she discovers more than one hombre in the bunch would like to slit her throat.
Series: An Aggie Mundeen Mystery


My review: Dang Near Dead by Nancy G. West

I liked this second book of Aggie Mundeen mystery. It is full of drama, humor and action. The suspense is pretty good. I had no idea who the guilty parties were or there motive. Lots of suspects. It is a clean read.

The three main characters do a lot together Aggie, Meredith and Sam. They decide to go to a dude ranch for a working vacation. No one else knows that Sam is a cop. Aggie starts getting to know the workers on the ranch and they talk to her.
Aggie starts noticing a lot of things around the ranch and eavesdrop a lot.

When a expert rider is thrown off her horse and things don't look right Sam decides to stay at the ranch and not let anyone know he is a detective. Aggie sneaks out after things quite to look over the ground and bags different things. Then two others show up to look around too.

I liked that Sam and Aggie worked together in this book after the first lectures. I hope that Aggie tells Sam what she is hiding from them. I am glad they are getting closer slowly. I want to see more of Aggie and Sam work together again.

The setting for this book is Texas hill country on a dude ranch.

I look forward to reading the next book in the Aggie Mundeen Mystery series.

I was given this ebook to read by Net Galley and Henery Press. I promised in return to give honest review o Dang Near Dead.