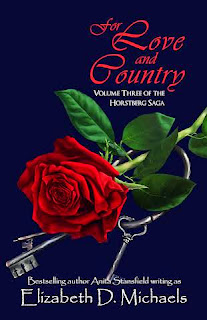 For Love and Country

When A Man Is Torn Between Honoring His Country And The Woman He Loves, The Best Option Might Be To Choose Both.

When Maggie du Woernig willfully ignores her parents’ admonitions and entangles herself with Nik Koenig, she is certain he’s the only man who will make her happy. Blind to Nik’s real intentions, she throws herself recklessly into a situation that could not only destroy her life but compromise the safety of her country.

Han Heinrich has resigned himself to working in the castle stables, mostly as an excuse to have contact each day with Maggie. His aspirations for a more fulfilling career seem fruitless, in spite of his father’s position as the duke’s highest advisor. But when Han learns about Maggie’s precarious situation, he is willing to sacrifice everything to protect the woman he loves, and to save the country he would die for. He only hopes that someday Maggie will forgive him. 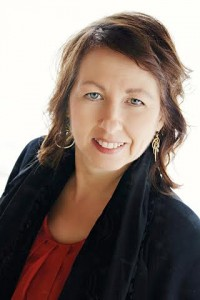 Elizabeth D. Michaels began writing at the age of sixteen, immersing herself ever since in the lives created by her vivid imagination. Beyond her devotion to family and friends, writing has been her passion for nearly three decades. While she has more than fifty published novels under the name Anita Stansfield and is the recipient of many awards, she boldly declares The Horstberg Saga as the story she was born to write, with many volumes in the works. She is best known for her keen ability to explore the psychological depths of human nature, bringing her characters to life through the timeless struggles they face in the midst of exquisite dramas. For more information, please visit her author page on WhiteStarPress.com.

My review: For Love & Country

This book is a Saga that you won't want to put down till you have finished reading it. For Love & Country is book 3 in the Horstberg Saga. It is the only one I have read and I thought it stood alone fine. Of course now I wish to have read the first two books in the series sometime.

The Duke is ruler of the land. His eldest daughter is Maggie du Woerning. At first glance she is a spoiled princess. She has agreed to a Royal Wedding. The Duke tries to get her to marry for love but she is determined to have her way. Then she meets her cousin Nik
and wants to break her engagement.

Han Heinrich is a a castle stable hand. His best friend is Erich heir to the Duke. He was raised with them and schooled together. His father George is the Duke's highest advisor and best friend. His mother is the Duchess maid and friend. I really liked Han.
He has loved Maggie for years. He is honorable and funny.

The Duke asks him to take a risky mission and he accepts it.

Hans uses humor to hide his true feelings at time, he also uses it to make others feel better.

This is one long drama with lots of action, romance and sacrifice. It is also a clean book. I laughed, rooted for Han, laughed and cried with these characters. I do want to see more of them. I will be on the lookout for the next two books.

I thought this was the first book I have read of Elizabeth D. Michaels till is saw about the author and realized I have enjoyed many of her books.


I was given this ebook to read and agreed to give it a honest review and be part of its book tour in exchange.

Open only to those who can legally enter, receive and use an Amazon.com Gift Code or Paypal Cash. Winning Entry will be verified prior to prize being awarded. No purchase necessary. You must be 18 or older to enter or have your parent enter for you. The winner will be chosen by rafflecopter and announced here as well as emailed and will have 48 hours to respond or a new winner will be chosen. This giveaway is in no way associated with Facebook, Twitter, Rafflecopter or any other entity unless otherwise specified. The number of eligible entries received determines the odds of winning. Giveaway was organized by Kathy from I Am A Reader and sponsored by the author. VOID WHERE PROHIBITED BY LAW