A Ghostly Grave: A Ghostly Southern Mystery by Tonya Kappes 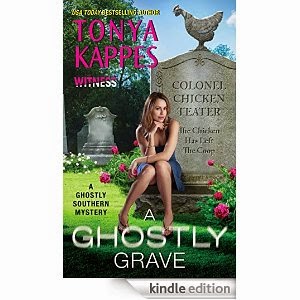 Four years ago, the Eternal Slumber Funeral Home put Chicken Teater in the ground. Now undertaker Emma Lee Raines is digging him back up. The whole scene is bad for business, especially with her granny running for mayor and a big festival setting up in town. But ever since Emma Lee started seeing ghosts, Chicken's been pestering her to figure out who killed him.

With her handsome boyfriend, Sheriff Jack Henry Ross, busy getting new forensics on the old corpse, Emma Lee has time to look into her first suspect. Chicken's widow may be a former Miss Kentucky, but the love of his life was another beauty queen: Lady Cluckington, his prize-winning hen. Was Mrs. Teater the jealous type? Chicken seems to think so. Something's definitely rotten in Sleepy Hollow—and Emma Lee just prays it's not her luck.


My review: A Ghostly Grave: A Ghostly Southern Mystery  by Tonya Kappes

This is book two in the A Ghostly Southern Mystery.  I have read both books and have enjoyed them.
A Ghostly Grave starts by digging up a grave.  They know he was murdered four years ago because his ghost Chicken  Teater told Emma Lee he was poisoned.

Emma Lee runs her family business, the Eternal Slumber Funeral Home  with her older sister.  Emma is the undertaker. After a head injury Emma sees ghosts of murder victims.  Her family think she is crazy.  Her boyfriend believes her.

Sheriff Jack Henry Ross is now investigating the death of Chicken.  He wants Emma to stop investigating and just tell him what Chicken says.

Chicken Teater was married to a former Miss Kentucky.  He enters his chicken Lady Cluckington into contests and doted more on her than his wife. If his wife wants to inherit from Chicken she has to keep Lady Cluckington well and continue to enter her in contests.

Emma can not stop investigating Chicken's death.  Especially with Chicken always going with her and telling her stuff.

This has lots of humor, drama, mystery and action.  With a small town southern  flavor of characters.
I would read more from Tonya in the future.

I was given this ebook to read from Harper Collins and agreed to give honest review of A Ghostly Grave.
Posted by rhonda1111 at 10:23 AM