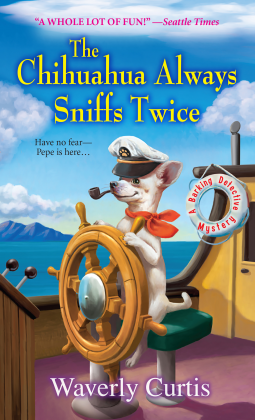 "A whole lot of fun!" --Seattle Times
"I have the body of a Chihuahua, but the mind of a master sleuth." Aspiring P.I. Geri Sullivan's new case has got her talking Chihuahua, Pepe, hot under the collar. Wealthy widow Lucille Carpenter left her entire fortune to her beloved dogs, and someone is trying to poison them. Anyone who would hurt a perro is lower than a cucaracha in Pepe's book. But when Geri and Pepe investigate, they discover that it's not just the coddled canines who are in danger. Now there are human targets too. At the lavish Carpenter manor, Pepe digs for clues among the pampered pooches, bitter relatives, suspicious staff, and larcenous lawyers. But there's only one diminutive detective smart enough to save the day--and the dogs…


My review: The Chihuahua Always Sniffs Twice by Waverly Curtis

The Chihuahua Always Sniff Twice is the fourth book of the Barking Detective Mystery.  It is the first one I have read.  I would love to go and read the other books in the series.

This is a cute story. The Chihuahua Pepe talks but only to P.I. Geri Sullivan his partner owner.  Some scenes will have you laughing out loud especially the bus chases.

Geri Sullivan is the main character.  She is learning how to be a PI. Geri has a cat and Pepe. Lots of people think she is kind of crazy because  she talks to Pepe and she hears him too.

Pepe is a talking Chihuahua who is working as a detective too. Pepe talks tough like he is a alpha dog but actions are different.  Pepe also falls in love. Pepe is very bossy to Geri.

Wealthy widow Lucille Carpenter  died and left her money to her dogs.  Now her kids want to break the will. Someone is trying to kill the dogs.

Geri is sent in to find who is trying to kill the dog.  But there is a couple of murders are happening.  Her boss is going behind her back and is being mysterious.

The setting is in Washington during in lavender festival.

I was given this ebook by Net Galley and Kensington Books to read.  So I can give an honest review of The Chihuahua Always Sniffs Twice.