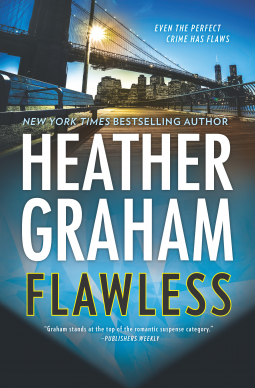 No one writes suspense like Heather Graham! Read this brand-new romantic thriller by one of today's most popular authors…
There's a pub in New York City that's been in the Finnegan family for generations. Now Kieran and her three brothers own it. Kieran Finnegan is also, as it happens, a criminal psychologist—a fitting reaction, perhaps, to her less-than-lawful teenage past.
Meanwhile, New York's Diamond District has been hit by a rash of thefts. No one's been killed—until now. FBI agent Craig Frasier is brought in to investigate; he and Kieran meet at a jewelry store in the middle of a heist. She's there to "unsteal" a flawless stone taken by her light-fingered youngest brother as an act of vengeance. Craig's there to stop the gang.
But the police and FBI begin to wonder if there are two gangs of diamond thieves, the original and a copycat group of killers—who seem to think their scheme is as flawless as the stones they steal.
Thrown together by circumstance, drawn together by attraction, Kieran and Craig are both assigned to the case. But to Kieran's horror, there's more and more evidence that, somehow, the pub is involved. Because everyone goes to Finnegan's…

My review: Flawless by Heather Graham

Flawless is a change of pace for Heather Graham.  It has no paranormal aspect to it.  Just a good romantic suspense.  I was not sure who the bad guys were till the end.

Kieran Finnegan is a smart hard working woman.  She just graduated from college and working at a new job full time and then after work she helps work in her family's bar Finnegan.  She cares about the people around her.  Has a great motto.

Kieran is returning a diamond that was taken from a jewelry store when it gets robbed.  She becomes a kidnapped victim.  She is not afraid to take action.  She needs to keep it a secret her real purpose for being in the store at the time of robbery.

I did stay up late till I had finished reading Flawless to see what and who the bad guys were.

The setting for the story is New York City, NY

There are a few love scenes in it.
I like all the FBI Agents in the story.  I hope we get to see more of them in the future.  Plus all of Kieran's family I would like to see again.

There is a lot of humor along with mystery.

I was given this ebook to read by NetGalley and Harlequin and in return I agreed to give a honest review of Flawless.