Stepping into the Prince's World by Marion Lennox 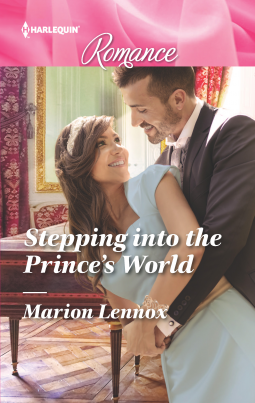 Falling for the secret prince
Claire Tremaine accepted the post as sole caretaker of a gorgeous island after a professional betrayal left her life in tatters. It's the perfect place to heal, until her solitude is interrupted by a gorgeous solider who's shipwrecked on her shores!
Raoul breaks down Claire's barriers with his kindness and kisses, but she's stunned when he's revealed as Prince of Marétal. She believes they can't be together…until Raoul whisks Claire to his palace! She's stepped into the prince's world—but can Claire capture this prince's heart?

My review: Stepping into the Prince's World by Marion Lennox

Cute romance.  Has a lot of fairytale items in just the right amount. The Prince Raoul doesn't tell her right off he is a Prince. A grand ball with the dress to go with it.  Raoul has  to make some tough choices.

Somethings are expected but anough surprises to make the story fresh and its own.  I enjoyed the story.

Claire Tremaine is a character that is going through some tough times again.  She comes from nothing and makes it as a lawyer.  People her whole life has judged her because of things she had no choice on instead of how far she has made it.  What she can and has done herself.

Claire risks her life to save Raoul.  A stranger who ship wrecked off the island she is care taking by herself.

The second part of the story takes place in Raoul's country.  Which changes the story a lot.

I was given this ARC to read for free from NetGalley and Harlequin.  In return I agreed to give a honest review of Stepping into the Prince's World.   Now I am going to buy another book by Marion Lennox that looks good to read.