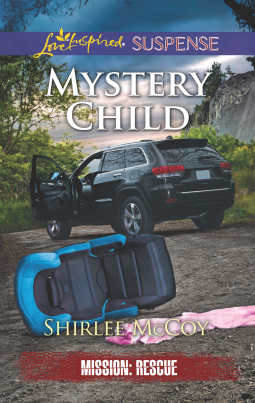 TO SAVE A CHILD
In the dark of night, Quinn Robertson is on the run with her little niece, desperate to bring the child to her biological father. All Quinn knows from her scared sister is that the girl is in terrible danger. And when a security and rescue specialist intercepts Quinn and claims he's there to help her, she isn't sure who to trust. According to Malone Henderson, Quinn's niece was stolen as a baby from her real father—the very man Quinn is trying to reach. As Quinn works with Malone to uncover the truth, someone is trying very hard to make sure certain secrets stay buried, and that father and daughter are never reunited.
Mission: Rescue—No job is too dangerous for these fearless heroes

The story starts off right from the beginning. Quinn Robertson is hiding in the woods with her little niece trying to get to her brother's place.  Some men are chasing her.  She is taking Jubilee to her birth father.

Quinn is a teacher.  A widow who has not seen or heard from her sister in years. Tabitha had shown up at her door with bruises on her and her daughter.  Asking for help because her husband wants to hurt her,  She gives her Boone Anderson's name and address.

Malone Henderson, is asked by his boss to meet Quinn at her brother's and guard the child till Chance and others on the team can get there.  Boone is out of the country and can't make it back for 30 hrs.  Malone was nearby camping on vacation.  He wants to make sure if it is Boone's missing daughter that nothing happens to her.
There is so much drama, action, danger, mystery and romance as the members of HEART try and keep Quinn safe and find her sister.  They want answers for Boone.   This is a clean read.

I look forward to reading more books from Shirlee McCoy in the future.

I was given Mystery Child to read by NetGalley and Harlequin and in return I agreed to give a honest review of Mystery Child.
Posted by rhonda1111 at 12:26 PM