In a Killer's Sights by Sandra Robbins (Smoky Mountain Secrets, #1) 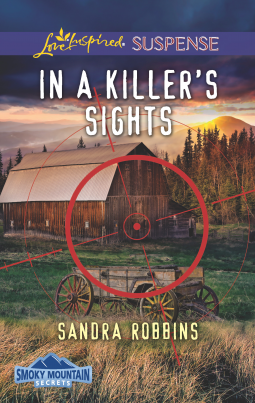 WITNESS IN JEOPARDY
When Gwen Harwell witnesses someone dumping a body into a Tennessee river, she knows she's the killer's new target. Far from home on a work assignment, she isn't sure where to turn—especially when her ex-husband appears. Five years ago, Dean Harwell's burdens from his police work tore their marriage apart. But now he says he's changed. He's working as a rancher; he's put his problems behind him. And he's committed to keeping her safe until the killer is caught. With their troubled past, trusting him with her life is hard enough. Can she trust him with the truth about the child he doesn't know they have?
Smoky Mountain Secrets: Love and danger collide in the Southern wilderness

My review: In a Killer's Sights by Sandra Robbins (Smoky Mountain Secrets, #1)
4 starrs

Good suspense! Lots of drama, romance and action. Clean read.  I was able to figure out who the guilty person early and his motive for it.

Gwen Harwell is out taking pictures when she catches a guy throwing a body into a river.  She runs away but gets shot. She has built a good life after she left her husband.  She is keeping big secret from him.

Dean Harwell is giving a trail ride when he sees a masked man chase and shoot a woman in parking lot.  He is surprised when it turns out to be his ex-wife.  Dean wants another chance with her. He has changed from the bad habits he used to have.

There are lots of twists, as they try to figure out who is after Gwen and why.

Deals with forgiveness and how drinking can destroy a person.

I would read another book in the Smoky Mountain secrets series.

Did not want to put book down till I finished it.  Easy fast entertaining read.

I was given a free copy of In a Killer's sight to read by NetGalley and Harlequin.  In return I agreed to give a honest review of It.
Posted by rhonda1111 at 7:00 AM