Ruthless The Faces of Evil Series: Book 6 by Debra Webb 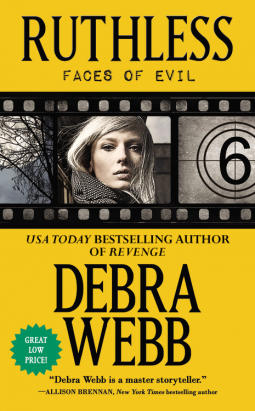 He has a ruthless past . . . Three photos of three unknown women. Sent to Deputy Chief Jess Harris by the Player, one of the world's most sadistic killers. The Player is taunting her, and Jess is more than ready to take on his challenge. Only one thing could distract her from the Player's deadly game: the appearance of a clue to long-unsolved cases. For years Birmingham's children were vanishing-one per year, always on a full moon-until the disappearances stopped and the Man in the Moon case went cold. No leads on the children were ever found-until now.
Jess has no choice but to pursue the case. Someone is reaching out to her, sending her mementos of the missing children, and the citizens of Birmingham deserve justice. But after years of silence, has the Man in the Moon really resurfaced? Or is he just another pawn in the Player's game?

My review: Ruthless The Faces of Evil Series: Book 6  by Debra Webb

I am totally into this series of books.  Ruthless  is good. tension was good, the drama, characters.  I did not want to put the book down.  I have also bought the rest of the series to read next.

The faces of evil series is a soap opera, small town feel following the characters in there relationships while they try and solve serial killers, kidnappers and other cases.  Jess Harris is the main character.  She is the new Deputy Chief of Special Unit Police in her home town of Birmingham.  She has not lived there for twenty years.  Her boss Police Chief Dan Burnett is also her ex-fiance of two decades ago. People are watching and judging them.

Jess had solved some big cases the month she has been back.  She also has a serial killer who she identified but got away taunting her,  sending her messages.  Jess has only been back home a month.  She has left the FBI recently divorced.

These books follow each other and so far in the six book has only covered about a month.  Each one deals with a emotion as a motive of evil.

Ruthless is about a old serial kidnapping that for twenty years in a row A child was kidnapped and taken with no clues. He got the nickname The Man in the Moon.  He stopped for the past decade or so, but now he is sending Jess packages of the bones of each of the girls and asking her to find him.

This series has a darker feel to it.  Fighting these evil men.  There is plenty of drama, suspense,  characters that I love and enjoy seeing there relationships grow.  There is some romances building between a few couples. a couple of love scenes.  Lots of mystery,  Cant wait to start the next book.

I was given an ARC to read for free in exchange for a honest review of Ruthless.
Posted by rhonda1111 at 10:17 PM