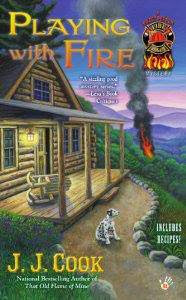 Playing With Fire
by J.J. Cook

Welcome to Sweet Pepper, Tennessee. Nestled in the Great Smoky Mountains, it’s home to the hottest and sweetest peppers in the world—as well as at least one ghost and a hotbed of secrets…

Fire Chief Stella Griffin is working to solve the mysterious death of her predecessor, Eric Gamlyn—who also haunts her cabin. Yet the more she learns, the more burning questions she must answer. Just as Stella thinks she has a lead from Deputy Chum, someone snuffs her hopes—and the lawman.

Adding fuel to the fire, Stella’s parents soon arrive—with her ex-boyfriend—hoping to persuade her to return to Chicago. Now Stella is torn between the life she left behind and uncovering what happened to her ghostly friend. But she’d better think fast or more than her investigation could go up in flames… 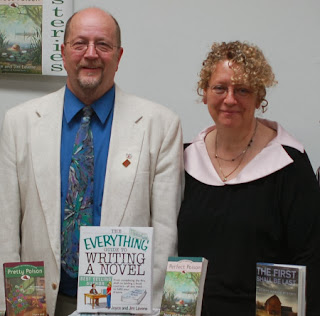 J.J. Cook’s first mystery, That Old Flame of Mine, became an instant bestseller in 2013. Playing with Fire is the second book in that series. They write award-winning, bestselling mystery fiction as Joyce and Jim Lavene, and Ellie Grant. They have written and published more than 70 novels for Harlequin, Berkley, Amazon, and Gallery Books along with hundreds of non-fiction articles for national and regional publications. They live in rural North Carolina with their family.
www.jjcook.net


My Review:Playing with Fire by J.J. Cook

I like Playing with Fire. It has strong female characters, good suspense never sure who the bad guys are till the end, a ghost who likes to cook, family secrets, Overall a book you don't want to put down. This is the second book of the series.

Stella Griffin is the Fire Chief for Sweet Pepper, Tennessee. She is from Chicago and came to spend three months setting up the new Fire station. That was last year. Everyone wants to know when she is leaving. Stella wants to find out who killed the old Fire Chief Erik and hid him in old fire station.

Erik died 40 years ago. Everyone thought he died in a fire before his body was found. He has lived in his old house and Fire Station that he built since he died. Erik has haunted everyone who has tried to live their except Stella. Erika does not remember dying. I am glad I am not on his bad side.

Small town of Sweet Pepper Tennessee is the setting for the book. Their is one rich millionaire that runs the town. He is blamed for everything. Ben Carson who Stella found out to her surprise is her grandfather.

The plot has a bunch of twists, humor, that leaves you wanting to find out what happens next. It is interesting all the practice that a volunteer fireman have to do. Since I live in a town that has volunteers too. Makes me appreciate them more.

Lots of information about Sweet Peppers thrown into too.

I was given this book and asked to give honest review of it and be part of its blog tour.

I want to win more book in this series. Ghosts, mystery and hot guys

I really enjoyed the first book in this series

I so want to read this book!

I enjoyed this book also! =)

congrats to JJ on this release!!!
thank you for the giveaway!!!

I love book giveaways always . thanks