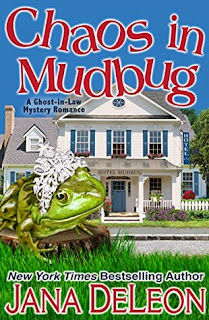 Jadyn St. James hopes that the two-week quiet period in Mudbug means things in the small bayou town are back to normal…whatever that is. But when a fisherman finds a sunken shrimp boat, and the boat captain is missing, Jadyn wonders if the damage to the boat was caused by a storm, or if something far more nefarious happened.

Colt Bertrand has been fighting his attraction to the sexy game warden since he first laid eyes on her. Once more, their jobs have forced them together, but when a stalker sets his sights on Jadyn, Colt’s emotions launch into overdrive.

Can he protect the bayou beauty and also protect his heart?

I realized that there was two new books in the series that I had not read yet. So I read them both right after each other.

Helen is back. She has a lot of issues and is stressed. She hates being shot at. Even though she has been dead over a year. She can not control what she wears. Or even if she has mass or not. She will bring lots of laughter as you read about her.

Jadyn is one of the lucky ones that can see and talk to her. Which makes for fun when she tries to ignore her. Jadyn is the game warden in Mudbug. She is pretty new to the area still.

Colt is the sheriff. He has been attracted to Jadyn even kissed her once but after the case they were working he had to leave town. Now he is back and they have to work together again.

A boat has been found damaged, all identifying name has been missing. They don't know who owns it. If they have a missing person or what. As they try and figure out who owns the boat someone tries to kill Jadyn.

This is a fun series that Made me laugh a few times and smile through the book. I hope more books come with these characters. I will read them.
Posted by rhonda1111 at 9:32 PM