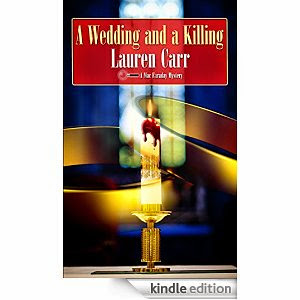 When Mac Faraday decides to do something, there’s no stopping him … even murder!

Not wanting to wait until their big day to start their life of wedded bliss, Mac Faraday and his lady love, Archie Monday, decide to elope to the little church where his ancestors had all married—along the tranquil shore of Deep Creek Lake. However, before they can say, “I do,” the sanctuary erupts into chaos when Gnarly finds a dead body in the church office.

As they dive into the investigation, Mac and his team discover more questions than answers. What kind of person walks into a church and shoots a man for no apparent reason? How do you solve the murder of a man who has no enemies in the world? Which of the seemingly kind-hearted church members is really a cold-blooded killer?

Then, there is the all-important question, how long do Mac Faraday and his lady love have to wait to get married?
File Size: 2753 KB
Simultaneous Device Usage: Unlimited
Publisher: Acorn Book Services (September 13, 2014)
Sold by: Amazon Digital Services, Inc.
Language: English
ASIN: B00MQESTYC

My review:A Wedding and a Killing (A Mac Faraday Mystery Book 8) by Lauren Carr

I received this book today and had to start reading it right away. I did not want to put the book down till I had finished The Mac Faraday Mysteries all have sense of humor, good suspense and enjoyable characters. A wedding and a Killing does not let you down. While this book can stand alone it is better if you have read some other books in the series. But if not they do introduce the characters in front of the story and little bit about them. I have liked them all and have read them more than once.


A Wedding and a Killing did have one scene with gnarly at the end I could do without. Had nothing to do with mystery just my weak stomach.

Mac Faraday is the main character. He inherited on the day of his divorce 270 million of dollars. He also got property that came with a dog and Archie living on the estate. He was a homicide detective in D.C. Now as a hobby he works on murders in his new town of Spencer. People are always getting him confused with a fictional character his mom wrote about.

Archie Monday was left the guest house on estate Mac received. She worked for Mac's birth mother as assistant and book editor. Now engaged to Mac.

Gnarly is a German shepherd and a very smart dog. He is also a thief. He causes a lot of humor in the book in one scene Mac and Archie are arguing about Gnarly.

"Maybe Gnarly would respect you more if you stopped peeing in his porcelain water dish" Archie quipped.

Sometimes the humor is caused by what the Gnarly does and some time it is what the humans around him say and do about him.
Gnarly can be scary dog he definitely has his own personality. Love him but am glad he is not my dog. I have to say I liked the dog fight he got into I was rooting for the other guy. Well did have too my Chihuahua was sitting on my foot.

The story starts out with Mac and Archie having a wedding they are eloping when Gnarly went to an office and won't stop barking. No one can get him to stop. Then Mac and Archie start arguing and soon someone screams. Gnarly was barking at a locked door and their was a man who had been shot three times in the room. The plot twists and turns around multiple crimes till they find the truth.

Mac's best friend standing up for him is his younger half-brother David O'Callaghan Spencer police chief. So Mac and David were on the scene as soon as it was found, but Gnarly was on the scene first.

A Wedding and a killing has lots of action, suspense, murders, mysteries and humor and it also has mention of prayer and God in a respectful way with both humor and truth as a lot of the story takes place in a church and are suspects.

I prefer Lauren Carr's Mac Faraday Mysteries but I do like her other mystery series Partners in Crime.

I was given this ebook to read and in return agreed to give honest review of it.