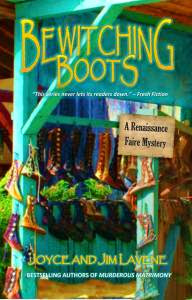 Jessie is thrilled when she finds Bill Warren, an old fashioned shoemaker, and he agrees to come back to Renaissance Village with her. She’s not so thrilled when claims to have elf magic, and he falls for Princess Isabelle. The dancing slippers Bill makes for Isabelle make him a suspect when the princess takes a leap from the castle terrace. Now, Jessie must find the lady or lord who helped the princess with her last dance before she loses her star attraction. 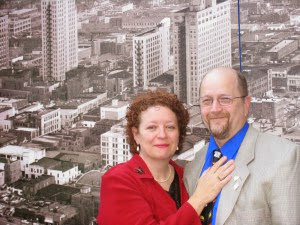 Joyce and Jim Lavene write award-winning, bestselling mystery fiction as themselves, J.J. Cook, and Ellie Grant. They have written and published more than 70 novels for Harlequin, Berkley, Amazon, and Gallery Books along with hundreds of non-fiction articles for national and regional publications. They live in rural North Carolina with their family.

My review: Bewitching Boots by by Joyce and Jim Lavene (A Renaissance Faire Mystery #7)

I like Renaissance Faire Mystery series I have only read three of them before Bewitching Boots. I saw this was coming out soon so I was looking for other ebooks in the series I had. I could not find Treacherous Toys on my kindle on my nook. I looked in pdf's on my computer going crazy because I know I had read it that the author had sent it to me. Then I remembered oh I actually had received a book in the mail.

I was looking at buying this I had forgotten I had signed up for my blog to review it. Excited to get it yesterday so I read and enjoyed it.

It has tons of fun characters in different period of costumes. They are having auditions at the Renaissance Faire right now. It has ghosts and magic and murders now at the faire too. Lots of comedy, action, drama fill the pages.

There is a new exhibit opening in the museum at the Renaissance Faire. A cobbler has come and is going to make shoes and sell his shoes.
Princess Isabelle wants the cobbler Bill to make her a pair of dancing shoes. She flirts with bill and he promises her shoes.

Bill Warren a cobbler believes his shoes are made with elfin magic. He believes that his magic is out of control and his shoes killed Princess Isabelle.

Jessie is now married to Chase. They live in a magic apartment over the jail. She is in charge of the museum and getting new exhibits. She found Bill and brought him to the Renaissance Faire. Jessie does not believe it is Bill's fault that Isabelle died.

Chase the bailiff he is in charge of the security at the Renaissance Village and works with the police when they need to be called in. He used to date Princess Isabelle when Jessie came first to work there.

Wanda used to work at the Faire she was not a nice lady. She is a ghost that is dyed blue and naked. Jessie is one of the lucky ones that can see and hear her. She brings a lot of humor to the story.

I would love to go to the Renaissance Village it sounds fun to visit and a hoot to live and work their.

Renaissance Village the workers can't not use phones, electricity, and modern clothing while the village is open. They act and talk in costume of their characters.

They have a castle with actors playing the royal family with servants and their every need taken care of.

So far I have enjoyed all the books that I have read by Joyce and Jim Lavene.

August 9 – a chick who reads – Review

August 13 – Chloe Gets A Clue – Interview

August 14 – Escape With Dollycas Into A Good Book – Review

Thanks for having us here today!

Just saw that you're the first to sign up for my blog tour in December. Cant wait! And i think you may be the most prolific blogger ive ever seen. :) even if you werent, anyone who reads so much is to be greatly admired. :)

My name used to be Reid. I have always loved to read. With health issues reading is one thing that I can do. I don't have tv reception. So I read a book a day or so.
Love ebooks. Don't have to wait till I get a ride to bookstore a hour away. now just buy or receive from computer.