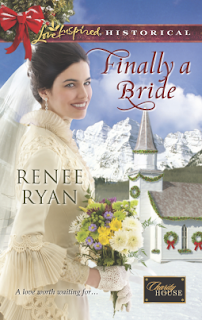 Seven years and two broken engagements haven't erased Garrett Mitchell from Molly Scott's mind. Her employer insists Molly and Garrett belong together. To appease the well-meaning matchmaker, the pair agrees to a pretend courtship. But too late, Molly finds herself falling for a man who might never trust her.

Garrett is a prominent Denver attorney now, not the naive seventeen-year-old who always felt second-best. Surely the string of suitors Molly's left behind only proves her fickleness. Does Garrett dare believe that she has only ever been waiting for him? The third engagement could be the charm, for his first—and only—love.


My review: Finally a Bride by Renee Ryan (Charity House #7)

I have read 5 books in this series this week. I have liked them all. I can't think of which one I have liked best. The best character of them all is Molly scott. She has changed and grown up. They are all clean books. Finally a Bride deals with self worth, faith and forgiveness,hav

Molly Scott is the main character in Finally a Bride. We met her first in The Marshal Takes a Bride (Charity House, #1) she was 5 years old. Now Molly is a companion to Mrs. Beatrix Singletary. Molly has had two engagements broken off. We find out more about her life before her sister found her at 5 years old.

Garrett Mitchell is the middle child. He has come back to town after he became a lawyer. Mrs. Beatrix Singletary wants him to work with her.

Mrs. Singletary is a rich widow. She supports a lot of charities. She also likes to be a matchmaker. She thinks Molly and Garrett
should be together.

The plot is Molly and Garrett were close growing up. In fact seven years ago they were in love. Then Garrett went away to school. They thought they were not important enough to each other. Now Garrett is back in Denver. There is also a secondary plot line that leads into the next Charity house maybe even the one after but I am guessing on that.

I have read this series in the wrong order. You don't have to but get more out of them if you do. I had read #8 first this week.
You will see the characters in previous books as secondary characters and catch up to their lives.

This does quote a bunch of scriptures and talks about prayer. In a good way as a natural part of the story.

Charity house is a place for children of prostitutes to go. They are raised with Christians values and get a education and love. These children are not welcome by most other people. Molly lived their her 5th year with her sister.

The setting is Denver, Colorado 1894

I have liked Renee Ryan's style of writing and will look for more of her works in the future.

I was given this ebook to read by Net Galley and Harlequin. I agreed to give honest review of Finally a Bride.