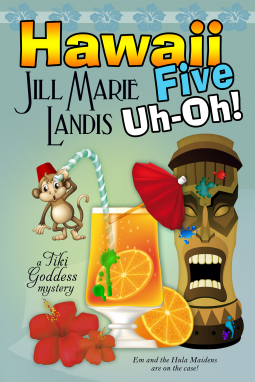 Em and the Hula Maidens are on the case . . . Em Johnson is prepping for the biggest catering gig she’s ever booked, this time at the world famous Tiki Goddess Bar. Then she hears Kiki Godwin has just been released from the psych ward at Kukuoloko. If the unpredictable leader of the Hula Maidens isn’t completely recovered from her PTMAD (Post Traumatic Monkey Attack Disorder), Em knows all hell could break loose at the upscale event. But for once, Kiki isn’t the problem. When the guest of honor’s multi-million dollar paintings are stolen and a security guard turns up dead, Kiki’s convinced the best way to get her mojo back is to capture the art thieves. Kiki and the girls come up with a plan to lure the felons out by staging a grand hoax. Their bait will be a cocktail party featuring paintings by the reclusive Alphonse Cappuccino, an “up and coming artist” who is none other than Kiki’s furry nemesis.Hawaii Five Uh-Oh is hilarious, non-stop action. So pour yourself a tropical beverage, kick back, and join Uncle Louie, Em, Sophie Chin, and the Hula Maidens at the always unpredictable, ever-entertaining, Tiki Goddess Bar.  A seven-time Romance Writers of America finalist for the RITA Award, Jill Marie Landis also now writes The Tiki Goddess Mysteries (set on the island of Kauai, Hawaii, where she lives with her husband, actor Steve Landis.) Visit her world of tiki totems, hula maidens, and tropical fun at thetikigoddess.com.

Em  and the Hula Maidens are back with mystery, laughter, &  fun characters.  I was excited to see a new Tiki Goddess mystery out. Very entertaining.

Kiki has spent the last six weeks in a hospital for the trauma of being attacked by a monkey who pulled out some of her hair.  She is scared and not herself.

The Hula Maidens are not the same without Kiki leading them.  Most of the ladies are over 60 and love to dance the Hula.  They are not natives either.  They are a riot and accident prone.  They perform at the Tiki Goddess bar.

Em has taken over managing the Tiki Goddess from her Uncle Louie who still makes up special drinks.  She is dating Rolland the detective/ fire dancer.  They also cater parties.

While everyone is working the party for a new neighbor is robbed of two famous paintings worth 30 million dollars.  A security guard is killed.  Kiki thinks if they solve the art theft crime she will get her mojo back.
Kauai, Hawaii is the setting for Hawaii five Uh-Oh!

This is a clean read.  Lots of drinking and recipes for some special drinks in the back of the book.

I like this series, it is fun, good mystery and characters that you want to see again and again.

I was given this ebook to read for free by NetGalley and BelleBooks. In return I agree to give a honest review of Hawaii Five Uh-Oh!