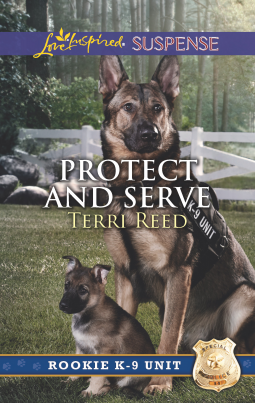 When rookie K-9 officer Shane West and his German shepherd partner find the lead police dog trainer murdered, he's determined to bring the killer to justice. But then he discovers Gina Perry hiding nearby—a pretty junior trainer who had the motive, means and opportunity to kill her boss. Gina insists her troubled brother is the real murderer…and this isn't the first time he's killed. And when Gina's brother comes after her, Shane is assigned to protect her and uncover the truth. Suddenly, Shane—a cop who always hoped to join a big-city force—vows to stay by Gina's side as a murderer lurks in the small-town shadows.  Rookie K-9 Unit: These lawmen solve the toughest cases with the help of their brave canine partners.

Protect and Serve is the first book in a new series.  The series follow new K-9 officers.  The head of the K-9 training center is killed. Another trainer is being stalked and attacked by her twin brother.  Their is another murder and two other past rookies death ruled a accident.  They are assigned to help look into these deaths and accidents.

Gina Perry comes home and finds her twin has found her and still wants her dead.  Gina is a trainer of the dogs and helps train dogs and police officers to become K-9.  She is single.
Gina runs for her life to the K-9 center for help and finds her boss dead.

Shane West and his German shepherd Bella are out walking when Bella hears something and runs to the K-9 center.  Shane finds Veronica dead body and Gina hiding.

There is a lot going on in this book. Action, romance, murder and suspense.  It is a clean read.  Does mention prayer and sometimes we don't think we get answers when we are told no or not yet. It fits into the story very well.

I like that Shane has some weakness that he overcomes.  I find that he is without his gun a lot while he is supposed to be protecting Gina.

I want to read the other books in the series and see who is behind the different crimes.

The setting is a small town of Desert Valley close by Flagstaff, Arizona.

I was given this ebook Protect and serve to read for free for the purpose of giving a honest reserve by NetGalley and Harlequin.
Posted by rhonda1111 at 10:31 AM