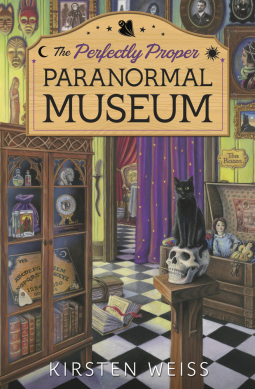 When Maddie Kosloski’s career flatlines, she retreats to her wine-country hometown for solace and cheap rent. Railroaded into managing the local paranormal museum, she’s certain the rumors of its haunting are greatly exaggerated. But a new ghost may be on the loose. A fresh corpse in the museum embroils Maddie in murders past and present.
With her high school bully as one of the officers in charge, Maddie doubts justice will be served. When one of her best friends is arrested, she’s certain it won’t be.
Maddie grapples with ghost hunters, obsessed taxidermists, and the sexy motorcyclist next door as outside forces threaten. And as she juggles spectral shenanigans with the hunt for a killer, she discovers there truly is no place like home.

My review: The Perfectly Proper Paranormal Museum by Kirsten Weiss

I thought it was a good new cozy series.  I would like to read more about the museum and the characters.    It was full of drama, plenty of suspects, murder and interesting facts from the museum.
It is also a clean read.

Maddie Kosloski moved back to her hometown after she was fired.  She lives above her Aunt's garage cheaply.  Her friend Adele Nakamoto tries to convince her to run the museum.  She is remodeling the other half of the building into a tea room.  They go to take a look at it late that night and find a dead body Christy.

Maddie agrees to take care of the museum for right now for Adele. Especially when the cops think they have something to do with the murder.  Adele does have motive and it is her building.  One of the cops bullied Maddie during high school.

Adele was given the building as a engagement gift from her father.  She does not want to run the museum but does not want to close it.  Her fiance Michael was caught having sex in the backseat of a car with Christy Huntington.

I like how Maddie keeps getting drawn into a murder generations ago.  Would have liked to see more of that closing of the case more in detail.

Maddie has no love life but she does meet a few guys and flirts with. She is having a hard time finding a job and keeps coming up for ways to improve the museum.  Something keeps happening at the Paranormal Museum.

I did not want to put the book down till I had finished reading it.

This is the first book I have read by Kirsten Weiss but I don't think it will be the last one of hers that I will read.

I was given this ebook to read by NetGalley and Midnight Ink.  In return I agreed to give a honest review of The Perfectly Proper Paranormal Museum.