Draw Me Close by Nicole Michaels (Hearts and Crafts #3) 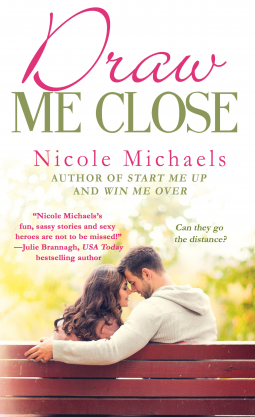 YOU NEED A GOOD FOUNDATIONLindsey Morales is a decorating genius with a natural flair for design and an eye for a bargain. As a contributor to a popular lifestyle blog, she can take anything from trash to treasure-except for her own life. Burned once, and badly, she's more than twice shy, especially when it comes to the breathtaking builder who broke her heart...
BEFORE YOU CAN BUILD HAPPILY EVER AFTERArchitect Derek Walsh has made a name for himself designing sleekly modern buildings, but when renovating a hundred-year-old farmhouse gives him the chance to see Lindsey again, he jumps at it. Still dreaming about her after eight long years apart, he'll do anything to prove that he's serious about spending the future with her. Can he convince sassy, stubborn Lindsey that they can DIY their own happy ending?

My review: Draw Me Close by Nicole Michaels  (Hearts and Crafts #3)

Good plot with lots of drama, romance about second chances. A couple of love scenes.

Lindsey Morales is decorator.  She helps write a blog. She repurpose items. makes things to sell on the internet.  She is having a down cycle right now.  Living with her sister.  She is decorating a old farm house for her good friend Annie.

Architect Derek Walsh is the contractor working on a old farm house for his good friend Mike.  He is divorced single father.  He wants to make amends to Lindsey for hurting her years ago. He thought he was making the right choices at the time.

Lindsey goes out of her way to not be around when Derek is working on the house.  She is still hurt by how he ended their relationship back in college.  Derek keeps trying to get Lindsey to listen to him.

While they work on the house together, they are both involved in the wedding of Annie and Mike.

This is the third book in the series.  It is easy to just read alone.  I did not feel lost in just reading the last book.  Someday I would like to be able to read the first two books of the series though.

I was given this ebook to read by NetGalley and St. Martin's Press.  In return I agreed to give a honest review of Draw Me Close.