Miz Scarlet and the Vanishing Visitor by Sara M. Barton 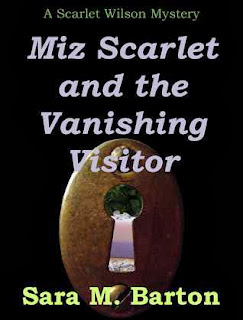 Miz Scarlet and the Vanishing Visitor

A pleasant night in Bay Head, NJ, unexpectedly turns dangerous as Scarlet Wilson heads for home after a delightful weekend at the Jersey Shore with boyfriend Kenny "Captain Peacock" Tolliver. A terrified teenager, chased by a homicidal maniac, clings to her car, refusing to let go of the moon roof. What do you do when a determined killer comes at the girl attached to your windshield, knife in hand? If you're Miz Scarlet, you get creative and put the pedal to the metal, even as the cars pile up in your wake.

That wild ride begins a journey of discovery for newly-orphaned Jenny Mulroney, the teenager who cared for her mother through her now-finished battle with cancer. The wicked stepfather has chased the girl out of her home and onto the road. Frightened and fending off unsavory characters with her wits, Jenny has no one to turn to and nowhere to go, until Miz Scarlet shows up and takes her home to the Four Acorns Inn, the family bed & breakfast she runs in Cheswick, CT.

While security expert Kenny delves into Jenny's secret past, searching for clues and the New Jersey State Police investigate a series of related crimes, the teenager begins to find her way again. Ready to start college with Miz Scarlet's help, busy earning her keep at the inn, Jenny's been less than honest about what happened before that crazed killer attacked. Now she's putting everyone in peril.

What does all this have to do with a bar of organic soap said to have healing powers? When uncut diamonds stolen in a heist turn up encased in lavender glycerine, it's more intrigue than Miz Scarlet can resist. With the help of the elderly "Googins girls", her brother Bur (better known as Colonel Grey Poupon), and Larry, the foxy female homicide investigator, the intrepid sleuth is hot on the trail, determined to solve the mystery. (Novella)


My Review: Miz Scarlet and the Vanishing Visitor by Sara M. Barton

I enjoyed this novella bringing back some familiar characters like Miz Scarlet and were loveable family and introducing some new characters that we learn more about them. Miz Scarlet and her brother are always throwing out insults back and forth that really seam like real relatives do. (especially noticed it reading the day after Thanksgiving with my family)Their is a lot of love with their family, friends and even guests of the bed and breakfast.

Most of the story happens in Cheswick, CT. at their Four Acorns Inn. The setting sounds nice.

The suspense is good and you are not sure who or what they were caught up in. Miz Scarlet was kept being told to leave it with the police but she could not stop trying to figure out who and why they were after Jenny.

The one thing I don't like about a lot of Sara M Barton's novels are their covers. It is surprising how covers even on a ebook matter too me.

My emotions were engaged into the characters. I found myself laughing, even some tears but most of the story I was smiling at the witty dialogue. Some of the characters nicknames are taken from the game Clue.

This has lot of drama, action, mystery and even romance. It is a clean entertaining mystery novella.

I got the ebook for free on Amazon.

Sara M. Barton is the author of several fast-paced mystery and thriller series, featuring lively characters and lots of action. "Miz Scarlet" (Scarlet Wilson Mystery series) is a teacher-turned-innkeeper, who throws herself into danger with a feisty determination to make things right, relying on cohorts like "Captain Peacock" and "Colonel Grey Poupon" to help her solve the clues. Deputy Gabby Grimm (Gabby Grimm Fairy Tale Mystery series) protects the citizens of Latimer Falls, where there are more cows, goats, and chickens than people, and she has her hands full when terrorists, organized criminals, and other bad guys wreak havoc with the peaceful village of Latimer Falls, Vermont. Sydney Stansfield (Off-the-Books Mystery series), an artist