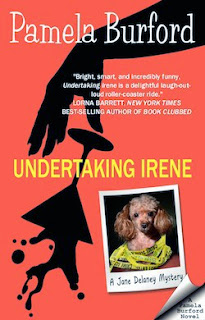 Jane Delaney does things her paying customers can’t do, don’t want to do, don’t want to be seen doing, can’t bring themselves to do, and/or don’t want it to be known they’d paid someone to do. To dead people. Life gets complicated for Jane and her Death Diva business when she’s hired to liberate a gaudy mermaid brooch from the corpse during a wake. Well, a girl’s got to make a living, and this assignment pays better than scattering ashes, placing flowers on graves, or bawling her eyes out as a hired mourner. Unfortunately for Jane, someone else is just as eager to get his hands on that brooch, and he’s even sneakier than she is. Just when she thinks her biggest problem is grand theft mermaid, things take a murderous turn. But hey, when you’ve teamed up with a neurotic seven-pound poodle named Sexy Beast, how can you lose? 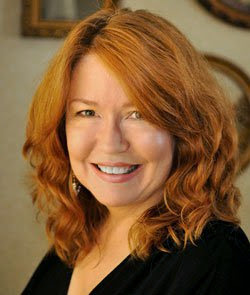 Pamela Burford is the best-selling author of 15 works of mystery, contemporary romance, and romantic suspense. She has received four RITA and Romantic Times Reviewers Choice Award nominations and is a frequent speaker at writers’ conferences and workshops. Her books have sold millions of copies, received outstanding reviews, and been translated into more than a dozen languages. Pamela is the founder and past president of Long Island Romance Writers, a chapter of Romance Writers of America. Fun fact: her twin sister Patricia Ryan, a.k.a. P.B. Ryan, is also a published novelist
http://www.pamelaburford.com

Jane Delaney has a very interesting job. She does things for or too people that have died. Right now her job is to steal a pin the deceased plans to be buried with. But someone beat her to it. It has some funny moments in this book, and some very serious moments too.

Jane finds her friend dead. She does not believe it was a natural death so she convinces someone to look into it. She ends up being a suspect. Their are a few suspects that have motive. It keeps you guessing till it reveals who.

cute dogs in this story. Interesting characters, Interesting romances, Looks like it could be a good series to follow and also a clean read. My attention was kept in the story. I hated to put it down.

Jane still likes her ex-husband that he is getting ready for his 4th wedding. She also likes a mystery priest. Jane does not have much money compared to those around her do. She really likes her employers dog sexy beast. Jane cares about those around her.

Jonah is a man of mystery that I really want to know more about him and where he got his skills.

Sexy Beast is a poodle with a real matted hair. I think my daughter's dog needs his hair cut too. Sexy beast is seven pounds. He is spoiled dog.

I will be looking to read other books by Pamela Burford in the future.

I was given this ebook to read and agreed to give honest review of it and be part of Undertaking Irene's blog tour.

August 19 – Cozy Up With Kathy – Interview

August 24 – Escape With Dollycas Into A Good Book – Review

This sounds like it may be a really cute little book. Would love to win it and read it!

would love to read this!!!
thank you for the giveaway!!!