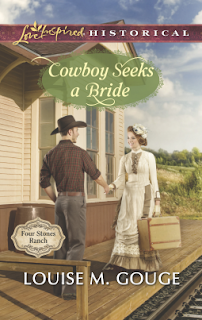 Description
Courted by a Cowboy
Marybeth O'Malley is everything rancher Randall Northam seeks in a wife…if she'd only say "I do." Although his family paid for her train ticket West with the understanding the two would marry, Rand won't pressure her to set a date. Especially since he suspects she's learned about his reckless past. Who would want to marry an untamed cowboy like him?

Marybeth won't marry until she locates her long-lost brother. And when Rand agrees to help her with her search, she can't deny her surprisingly warm feelings toward her prospective groom. Could this honorable cowboy show her he's the husband she never knew she wanted?
Series: Love Inspired Historical\Four Stones Ranch
Mass Market Paperback: 288 pages
Publisher: Love Inspired (January 6, 2015)
Language: English
ISBN-10: 0373282958
ISBN-13: 978-0373282951

I liked the story, community & characters. Also liked that it is a clean read and I wanted to know more about them. I did figure out what happened to her brother. Does mention church, scriptures and values as part of the story. It fits in with the story.

Randall Northam makes for a good hero. He is a good guy, who changed his bad ways and is trying to be better in his life.

Marybeth is likeable but was living a lie. She is smart, alone and cares about others. She does not want to make the same mistake as her mom. She wants to find her brother.

The setting is July 1881 Esperanza Colorado. A western town that does not have a bar. police. I liked the characters of the town that make the story and wants to bring you back to Esperanza and sees what happens next.

Marybeth agreed to marry Randall. She made the deal with his parents back east. She wants to find her brother that was last heard of years ago in nearby town. She found out on the train that Rand was a gambler and killed a guy. She is scared that he is like her father a drunk, gambler that is abusive. Marybeth plans to get a job. She knows how to use a typewriter, accounting.

Rand is agreeable to waiting to get to know Marybeth and to help her find her brother.

I was given this ebook to read by Net Galley and Harlequin. I agreed to give a honest review of Cowboy Seeks a Bride.