The Accidental Alchemist by Gigi Pandian 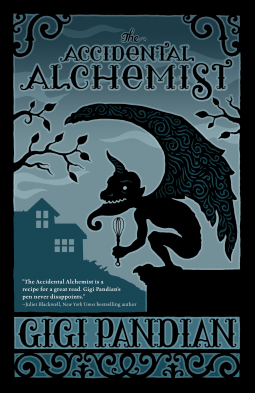 A modern tale of ancient intrigue from a USA Today bestselling author
When Zoe Faust—herbalist, alchemist, and recent transplant to Portland, Oregon—begins unpacking her bags, she can't help but notice she's picked up a stow away: a living, breathing, three-and-half-foot gargoyle. Dorian Robert-Houdin is no simple automaton, nor is he a homunculus; in fact, he needs Zoe's help to decipher a centuries-old text that explains exactly what he is. Zoe, who's trying to put her alchemical life behind her, isn't so sure she can help. But after a murder victim is discovered on her front porch, Zoe realized she's tangled up in ancient intrigue that can't be ignored.
Includes recipes!
My review: The Accidental Alchemist by Gigi Pandian
4 stars
This is the first book in a new series.  It is unique with a alchemist, gargole and teenagers as main characters trying to solve some mysteries.  It is a fun, clean cozy murder mystery.
Zoe Faust just moved to Portland, Oregon she has bought a real fixer upper.  When she finds some of her boxes opened. She finds a gargoyle hitched a ride from France in her boxes.   She is older than she thinks.
Dorian is a three-and-half-foot gargoyle who is alive.  But something is going wrong with him.  He knows that Zoe was a Alchemist in the past and he has some old alchemist books in Latin he wants help to stay alive.  He is a good cook.
Brixton is a teenager who breaks into Zoe's house on a dare.  People think her house is haunted.  Brixton sees Dorian that he is alive.
The setting is Portland, Oregon.  Talks a lot about Portland underground tunnels that make me want to take the tour and explore too.
This is a good start to a series.  I would love to read more of Zoe & Dorian.  I would love for her to have a romance with Max.  I would read it.
I love how it has a lot of real history and people mixed into her story so natural.  It made the book so believable.
I was given this ebook to read by Net Galley and Midnight Ink.  In return I agreed to give honest review of the Accidental Alchemist.
Posted by rhonda1111 at 6:37 PM