The Daddy Wish by Brenda Harlen 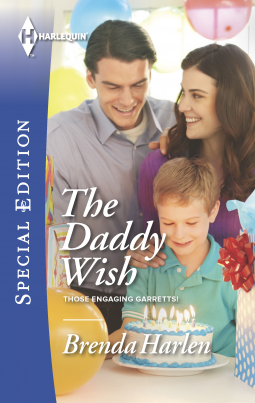 This could be the merger of a lifetime

The holidays are over, but Allison Caldwell can't stop thinking about the kiss she shared with Nathan Garrett under the mistletoe. The dazzlingly attractive playboy she's secretly crushed on for years isn't just off-limits because he's out of her league; the heir apparent to the Garrett furniture empire is about to be crowned CFO—and the single mother's new boss!

One night changed everything for Nathan. And now his executive assistant is strictly hands-off despite their intense physical attraction. Besides, Allison has a son, and Nathan's no family man. Then why is Nathan's head suddenly filled with fantasies of being a father? Perhaps this once-happy bachelor won't be single for long…

My Review: The Daddy Wish by Brenda Harlen
3 STARS
I liked the characters. the pace of the story, cute son,. I really enjoyed the scene where Nathan took her home to meet his parents with no warning.
Part I don't care for. The sex scenes. With the idea of just one night together won't hurt anyone.
Dylan's father putting him last.  I know it's hard on kids when promises are broken time after time. But it added to the story.
Allison is a single mother to Dylan. Allison's boss is retiring.  Her new boss she had slept with one business trip.
Nathan is a playboy. He does not do serious relationships. He is the new CEO of the company.
He wants more than a one night stand with Allison.
Dylan is a shy kid who has a hard time making friends.  He loves racing. He has bad asthma.
It was a nice romance. A fast read. Lots of drama going on.
I was given The Daddy Wish to read by Net Galley and Harlequin so that I could in return give a honest review of it.
Posted by rhonda1111 at 8:25 PM