Blame it on Mistletoe by Noelle Fox (North Pole, Alaska #1)

Welcome to North Pole, Alaska, where the Christmas Spirit lives all year long.
Lots of kids write letters to Santa. But those delivered to North Pole are actually answered by a group of dedicated volunteers who call themselves "the Elves." 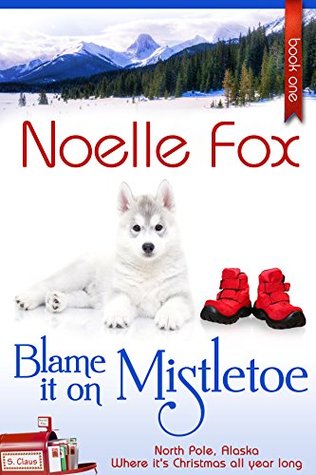 JD Baxter’s letter to St. Nick asks for just one thing: His father didn’t make it back from Afghanistan, and JD wants Daddy home again. Saints can do miracles, right? But since last year’s letter went astray, JD decides to stow away to North Pole and ask for his miracle in person.
In North Pole, he encounters a postmistress who looks exactly like Mrs. Claus, a man named Rudolph with a red nose and a herd of reindeer, as well as enough toys, candy and Christmas cheer to make anyone feel good. He just can't find St. Nick.
Abby Baxter has spent the year since her husband's death trying to hold on. When she discovers her son is missing, her entire world trembles— until her husband's best friend appears at her door, offering a steadying hand.
Frank Machado couldn’t save David Baxter’s life in combat. Worse, for years he's been secretly in love with David’s wife. Now that their son is missing, Frank is determined to see the child back in Abby’s arms.
But during their unpredictable, impulsive trip into the wilds to search for JD, the problem becomes staying out of those arms himself.
Sparks fly, hearts warm, love—and Christmas—are in the air. Should they Blame it on Mistletoe?

My review: Blame it on Mistletoe by Noelle Fox  (North Pole, Alaska #1)

This is a cute fun romance, but only because it was not my child missing.  JD who is five years decided to go to North Pole, Alaska to talk to Saint Nick about him bringing his deceased father back for Christmas. Because he wants a miracle.  No one answered his letter last year so this time he has written another letter and is coming in person to talk to him.

Abby has been a widow for over a year.  Her husband was a Marine and never came back from his last tour. She called police right after she woke up and couldn't find him.

Frank Machado is on leave and comes to meet Abby and JD.  He was her husband's best friend in the Marines. He steps up to help Abby find her son.

JD is smart and resourceful. but I have problems with him being in North Pole at night by himself and not freezing. Also where is he getting the money for food?  I do like him and he is cute kid.

I love the idea of the Elves writing and answering the children's letters. How special and hard to do.  There is a group who volunteer.  There is also a secret santa who goes around and leaving things with a big red bow that they really need.