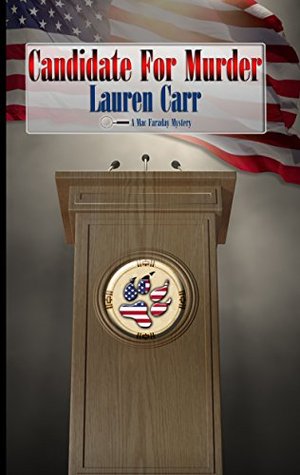 It’s election time in Spencer, Maryland, and the race for mayor is not a pretty one. In recent years, the small resort town has become divided between the local year-round residents who have enjoyed their rural way of life and the city dwellers moving into their mansions, taking over the town council, and proceeding to turn Deep Creek Lake into a closed gate community—complete with a host of regulations for everything from speed limits to clothes lines.
When the political parties force-feed two unsavory mayoral nominees on the town residents, Police Chief David O’Callaghan decides to make a statement—by nominating Gnarly, Mac Faraday’s German shepherd, to run as mayor of Spencer!
What starts out as a joke turns into a disaster when overnight Gnarly becomes the front runner—at which point his political enemies take a page straight out of Politics 101. What do you do when you’re behind in a race? Dig up dirt on the front runner, of course.
Seemingly, someone is not content to rest with simply embarrassing the front runner by publicizing his dishonorable discharge from the United States Army, but to throw in a murder for good measure.
With murder on the ballot, Mac Faraday and the gang—including old friends from past cases—dive in to clear Gnarly’s name, catch a killer, and save Spencer!

My review: Candidate for Murder (A Mac Faraday Mystery Book 12) by Lauren Carr

This is funny, full of true feelings people feel about politics at times.  I am convinced I would vote for Gnarly.
We learn about Gnarly's past and why he was discharged without honor from Army.  Fans of Mac Faraday will love it.  You can read as stand alone but much better to have read other books first.

Police Chief David O'Callaghan is fed up with both candidates for his small town Mayor.  He is dog sitting Gnarly and to make a statement he registers him as a independent candidate. Gnarly is smarter and more honor than anyone running.  Things take off right away because others are fed up too.

Lies come out about Gnarly and his past. Jessicas and Murphy get involved with Gnarly to find out the truth.
I want a less dangerous Nigel for myself.

One of the candidates starts to have things happen around them.  They don't trust David to be fair.

Mac Faraday is back with all his regular characters and some new ones too.  Mac on the day he lost everything in his divorce inherited $270 million dollar estate from his birth mother and property in Deep Creek Lake.  Mac was a homicide detective in DC.  Now he helps solve homicides as a hobby for his half-brother David small police force.

Gnarly is a German Shepherd that Mac inherited too.  Gnarly is smart and was trained by U.S. Army.  He is also a thief.

I love to read books by Lauren Carr.  They have mystery, drama, and humor.  I look forward to reading more of them in the future.  This is also a clean read.  Some violence dealing with murders, terrorists ect.

I was given this ebook to read for free by Lauren Carr.  This is my honest opinion.

Thank you so much, Rhonda for the 5-star review of CANDIDATE FOR MURDER! So glad you enjoyed and I'm sure your readers will enjoy it as well! Happy Reading!