Blog Tour: Devil in the Deadline by LynDee Walker Nice Giveaway too 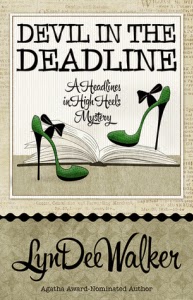 Devil in the Deadline


When the Richmond police offer an exclusive in exchange for help with a case, nothing—not even a costume party—stops crime reporter Nichelle Clarke from making Manolo tracks to the crime scene. The hunt leads her to a televangelist’s compound in the Virginia countryside where the Reverend may be more interested in fat stacks of cash than he is saving wayward souls.
With two sexy guys tangled up in Nichelle’s story—and in her heart—work and love are on a crash course for disaster. Pressure pours in from every corner, including a faceless new competitor that means the deadline is always five minutes ago. As secrets threaten and the truth becomes her lifeline, Nichelle must unmask the killer and nail down the story before she’s snared in the carefully-constructed web. 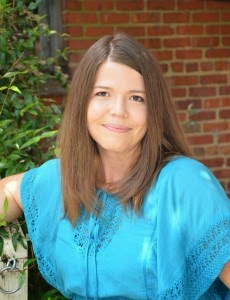 LynDee Walker’s award-winning journalistic work has appeared in newspapers and magazines across the nation.
Her debut novel, FRONT PAGE FATALITY, is an amazon and Barnes & Noble #1 bestseller, and was nominated for the Agatha Award for Best First Novel. DEVIL IN THE DEADLINE is the fourth in LynDee’s Headlines in High Heels mystery series. The fifth arrives October 2015.
LynDee adores her family, her readers, and enchiladas. She often works out tricky plot points while walking off the enchiladas. She lives in Richmond, Virginia, where she is either playing with her children, working on her next novel, or admiring beautiful shoes she can’t wear.
Author Links
www.lyndeewalker.com
www.facebook.com/lyndeewalkerbooks
@LynDeeWalker
Purchase Links
Amazon

My review: Devil in the Deadline by LynDee Walker
4 STARS
This is the fourth book of the series A Nichelle Clarke Headlines in Heels Mystery .  It was a good mystery, violence but just hints about how bad the crime was.
Nichelle is a newspaper reporter on the crime beat in Richmond, VA. her main completion is a T.V. reporter Charlie , and another reporter who wants her job. Now there is a Blogger who is scooping her with more details.
Nichelle has two guys in her life. One is old boyfriend Kyle who is ATF officer.  The other has ties to the mafia.
Nichelle gets called into a terrible murder because the cops want help that she might be able to get.  Two homeless found the grisly murder victim.
Nichelle has a good rep with police, other reporters.  She works hard and long.  She cares about the safety of others, doing the right thing.
I like Nichelle and want to see more of her.
I was given this ebook to read and in return I agreed to give a honest review of Devil in the Deadline and be part of its blog tour.
Rafflecopter Giveaway -  A tote bag with a Richmond Telegraph t-shirt, an electronic copy of Front Page Fatality, a signed Hardcover copy of Heartache Motel, a $10 amazon gift card, and assorted Headlines in High Heels swag.

The book sounds great~love the title and cover. Thank you for the great contest!

Book sounds fun and what an awesome GIVEAWAY!!!!

All of these books are so much fun, and what a terrific giveaway.