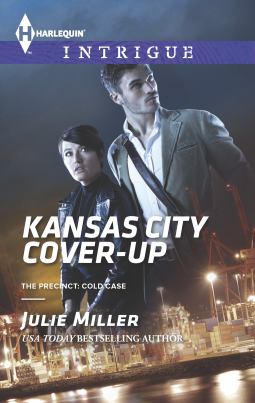 Political intrigue, an undercover investigation and a very mutual attraction

As the Kansas City Police Department's archenemy, reporter Gabriel Knight never expected to need its help. But the sexy journalist suspects the death of a politician's aide will shed light on the long-unsolved murder of his fiancée. He demands to team up with tough, beautiful detective Olivia Watson. Sharing a mutual distrust—and a disturbingly mutual attraction—Gabe and Olivia discover that someone's working hard to keep old secrets buried and stop their investigation dead. But as they come closer to the truth they edge closer to each other. Until now, neither has had room in their lives—or hearts—for a relationship. Yet all that could change…if Gabe can prevent them from becoming tomorrow's headline.

My review: Kanas City Cover-Up by Julie Miller  (The Precinct #25)

I liked Olivia Watson she is a strong female character.  She works in the cold case department.  She has made mistakes in trusting her last partner  and boyfriend. Olivia has to learn it is okay to accept help from others.

Olivia is third generation of policeman.  Her brothers are also working for the police.

Gabriel Knight is a reporter from the local newspaper.  He has written a lot of bad articles about the police department. Especially because they have not found his fiancé that died four years ago.  He is sure this new murder is connected to his fiancé's murder.  He is determined to find her murderer.

As Olivia gets the case looked at again someone wants to stop her.  The case was the last one her father worked before he was forced by injury to leave the force.

This has a lot of mystery, action, and romance to it.  Does have some love scenes.  There is part of the story that will carry on in future books.

The setting is Kanas city.  It is a fast paced book.

I was given this ebook to read by Net Galley and Harlequin.  In return I agreed to give honest review of Kanas City Cover-Up.
Posted by rhonda1111 at 5:30 PM