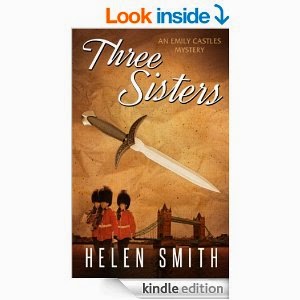 Emily receives an invitation to a party in a large house at the end of her street, hosted by a mysterious troupe of circus performers. She accepts, despite her misgivings, because her dog has died and she needs cheering up. But when she witnesses a murder in the midst of the surreal entertainment, no one will believe what she has seen. Is Emily befuddled with grief at the loss of her pet? Or has something wicked happened in plain sight of all the party-goers? Emily and her eccentric neighbours attempt to discover the truth in a charming story that will have you giggling at every funny line.

Three Sisters is a British mystery novel.  It is only 104 pages.  It is a pretty good story.  I did guess part of the mystery early.  I liked Emily.

Emily likes mysteries.  She is really feeling the loss of her dog.   Which I can understand some of it.

I found it interesting that a group just moves into a empty house fixes it a little.  They are having a big party and inviting everyone.  It is Halloween and Guy Fawkes night.  The group is a troupe of circus performers.  Not sure what is real and what is just a act.

Emily sees one of the blindfolded knife thrower sisters get stabbed with a knife.  The police are called and the dead girl stands up and says it was an act. Emily is not satisfied with the answer.

The setting is London, England at the end of Oct.
It is a clean read, some humor, some sadness.  A interesting read as you try and figure out with Emily just what is going on.  Who do you trust?

It would be interesting to see what happens next to Emily.

I was given this ebook to read by the author.  In return I agreed to give a honest review of Three Sisters/
Posted by rhonda1111 at 12:41 AM