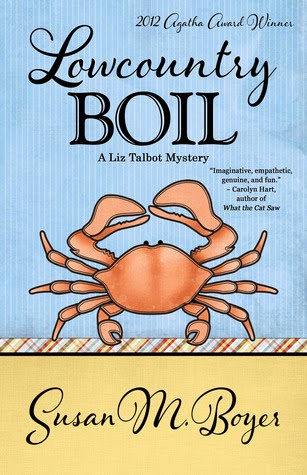 PI Liz Talbot is a modern Southern belle: she blesses hearts and takes names. She carries her Sig 9 in her Kate Spade handbag, and her golden retriever, Rhett, rides shotgun in her hybrid Escape. When her grandmother is murdered, Liz high-tails it back to her South Carolina island home to find the killer. But when her police-chief brother shuts her out of the investigation, she opens her own. Then her long-dead best friend pops in and things really get complicated. As more folks turn up dead, Liz must use more than just her wits and charm to keep her family safe, chase down clues from the hereafter, and catch a psychopath before he catches her.
A perfect book club recommendation: A charming cozy mystery filled with Southern humor and a saavy private investigator – see which of your group figures out whodunnit first. Related subjects include: cozy mysteries, women sleuths, southern humor, private investigator mystery series, book club recommendations, award winning fiction, whodunit mysteries (whodunnit).

This is the first book in the Liz Talbot Mystery.  I liked the characters.  The plot, the mysteries.
It is easy to get to know the characters and there messed up lives.  I want to read more and see what else happens.

Liz Talbot is single. She is a Private Investigator.  She sees her best friend who died when they were 17 tells her to go home. Then a phone call from her brother telling Liz that there Grandmother had died.

Liz left her island home because her cousin stole her boyfriend.  She thinks she still loves him.  Her grandmother left Liz her house and land.  To protect the island from development.

Her ex-husband is back on the island.  Her partner is his brother Nate.  There are so many relationships that intertwine with each other.  You never know who will end up with whom.

Liz is determined to find out who killed her grandmother.  She thinks she knows why but she is not sure.  Only Liz can see her friend.  Who now is a guardian spirit who's job is to protect the island.  But she also wants to protect her sister and friend.

It is a clean fun murder mystery.  For a small North Carolina island there is a lot of drama, murder and fun.