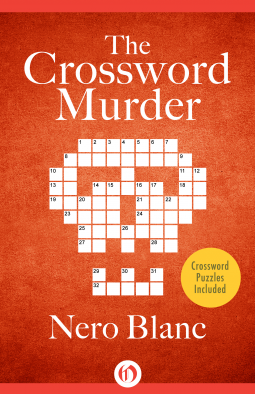 Playboy Thompson C. Briephs has just been found strangled in his bed. The police believe the Newcastle Herald crossword editor, a scion of a blue-blooded New England family, died from kinky sex gone wrong. But cop-turned–private investigator Rosco Polycrates thinks there’s a six-letter word for what happened. Enlisting the help of Annabelle Graham, the crossword editor for a rival paper, Rosco unearths a crazy quilt of suspects who had it in for the victim—and one of them was blackmailing him. Belle is certain the answers lie in Briephs’s twisty puzzlers. Now she and Rosco will have to employ some dazzling wordplay of their own to stop a cunning killer from crossing paths with another victim.

Readers will delight in solving the crime, along with six crossword puzzles, which can be downloaded as PDFs, with answers in the back of the book. The Crossword Murder is a book to be savored by mystery lovers and crossword-puzzle enthusiasts alike.

My review: The Crossword Murder by Nero Blanc  (Crossword Mysteries)

I liked it.  But did not take the time to work the crossword puzzles.  I just skipped over them.  They were important part of the book however.  I would have liked the puzzles to be in back of the book for easy finding when I wanted to work them.

There is a lot of quotes, crossword questions and answers throughout the story.  I should have bookmarked some of the facts.  There is the death of a Crossword Puzzle editor Thompson C. Briephs  from the Newcastle Herald.

private investigator Rosco Polycrates is hired by Thompson's mother to find out what happened to her son.  Rosco does not know anything about crossword puzzles so he goes to Annabelle Graham crossword puzzle editor for his rival newspaper to learn.

Annabelle sees the crossword that comes out after Briephs death and she works the puzzle and realizes that he is hinting about his own murder. She tries to get people to believe her.  They find Briephs had 5 more crossword puzzles with clues in them.

Lots of suspects,  a smart mystery I was kept guessing till the reveal. There is some suggestive motives for the murder. but really a clean story in all.

and in return I agreed to give honest review of The Crossword Murder.
Posted by rhonda1111 at 6:49 PM