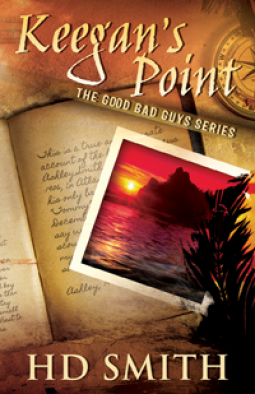 Twelve-year-old Charlie would give almost anything to visit the estate. He gets his chance—unwillingly—when he overhears a plot to steal something off the island.

Our "Good Bad Guy" Nick has a problem. Does he scrap the once in a lifetime chance to find the answers he seeks or take Charlie along for the ride?

Join Charlie on his adventure as he discovers just who Marcus Keegan really was, and learn the real truth behind Nick’s quest that has forced his and Charlie’s paths to collide.

This is quite a adventure.  Lots of mystery, danger, treasure hunt, with characters you can't trust.

Charlie is twelve year old.  He is smart, nerd, scared.  He is raised by his mother.

Charlie is doing a report on Keegan's Point.  Twelve years ago he was found in his mansion dead.  With lots ID.s and lots of questions are left about him. His heirs are unknown.

He over hears three guys talking about sneaking onto the island and looking for something.  Charlie is kidnapped and taken along.

Nick is the one who forced Charlie to come with them.  He has promised that he will be returned Monday.  He seems to be in charge of some things.

Zoe does not like Charlie.  She threatens him a lot.  She stays with the boat.  Sometimes she talks with British accent.

Paulie is the explosive guy.

Monroe is quiet.  He breaks into the house.

There is a lot of mystery about the mansion and Keegan who lived there for 56 years without leaving.

I would love to have secret rooms, and live on an island in a mansion.

This is a exciting book.  It is a fast clean read.

I was given this book to read by Net Galley and Wild Fey.  In return I agreed to give a honest review of Keegan's Point.