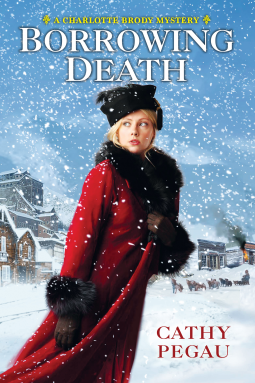 Suffragette and journalist Charlotte Brody is bracing herself for her first winter in the frontier town of Cordova in the Alaska Territory. But the chilling murder of a local store owner is what really makes her blood run cold. . .
After three months in Cordova, Charlotte is getting accustomed to frontier life. She is filing articles for the local paper--including a provocative editorial against Prohibition--and enjoying a reunion with her brother Michael, the town doctor and coroner. Michael's services are soon called upon when a fire claims the life of hardware store owner Lyle Fiske. A frontier firebug is suspected of arson, but when Michael determines Fiske was stabbed before his store was set ablaze, the town of Cordova has another murder to solve.
Her journalist's curiosity whetted, Charlotte begins to sort through the smoldering ruins of Lyle Fiske's life, only to discover any number of people who might have wanted him dead. As the days grow shorter, Charlotte's investigation turns increasingly complex. She may be distant from the trappings of civilization, but untangling the motives for murder will require plumbing the very depths of Charlotte's investigative acumen. . .

I like this series. Charlotte Brody is a smart, strong character.and follows her own path.  Though I find that I am more like the Chrurch ladies than her on issues.

Charlotte has come to Cordova in Alaska Territory to get away from home and visit her brother.  She writes for local newspaper and articles she sends back to the States.  She is fighting for ending prohibition, right to abortion and women right to vote.

She likes the deputy but has only flirted with him and shared some kisses.  Charlotte wants to figure out who killed a local businessman.  Along the way she gets into some trouble.

This is set in Territory of Alaska.

It is a good cozy mystery.  Lots of interesting facts about life during that time.  Interesting ending and want to see how that will work out in the future..

I look forward to reading more from Cathy Pegau in the future.

I was given this ARC to read for  free from NetGalley and Kensington Books.  I agreed to give a honest review of Borrowing Death.