Revenge The Faces of Evil Series: Book 5 by Debra Webb 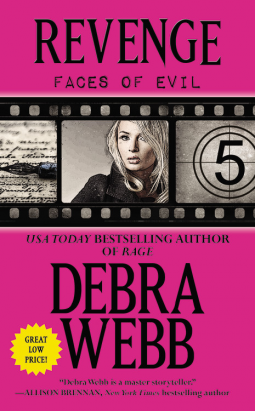 The desire for revenge can never be sated . . .
When her beloved high school teacher appears on her doorstep, Deputy Chief Jess Harris is flooded with fond memories-until the woman says she's about to be charged with murder. Called to the scene of the crime, Jess learns the victim of the bizarre and brutal slaying was a member of Birmingham's famed "Five."
Twelve years ago, the Five were rich, popular high school seniors who threw one wild last party. Two social outcasts were invited to play in the "loser games." The next morning, one player killed himself. Now Jess fears that an invitation to an upcoming class reunion may have forced the Five to play a new deadly game. As Jess fights to keep her former teacher from suspicion-and her relationship with Chief Dan Burnett separate from her work life-she knows she is caught in a vicious cycle of vengeance. And the killer is far from finished . . .

My review: Revenge The Faces of Evil Series: Book 5  by Debra Webb

Revenge is the emotion of this book,  This tittle fits the story.  Revenge is the 5th book of this series.  I am reading them back to back and have picked up little things from the books that I would have forgotten or did forget when I read the first few books apart years ago.  Now I have questions and can't wait to see if my guesses are right.  Would recommend reading these in order.  The books are back to back in the timeline.

Jess Harris is the main character in this series.  She was a FBI Agent but came back home to help solve a series of abductions because her ex-fiance Police Chief Dan Burnett. asked her for help. Now he gave her the job of Deputy Chief of Special Unit.

Some people are questioning that decision.  They are watching them.  Jess and Dan broke up twenty years ago but are still drawn to each other.  They both are divorced and single now.

Jess has a serial killer who is called the Player texting her and is over theme continuing  in the series so far.

Someone is killing a group of five old high school friends because of something they might have done 12 years ago.  They are from rich powerful families.

Jess's old teacher comes to her because she is afraid that she will be arrested for the murder anytime.

I do not want to put these books down.  Soon as I finish one and write the review I start the next one.  Years ago I had received a ARC but did not read in time so I bought the ebook on Amazon.

There is some swearing and a few love scenes.  There are crime scenes.  It kept me guessing who the killer was till the reveal.

Now I am going to start the next book of Debra Webb's Faces of Evil.