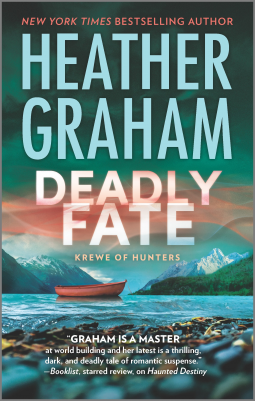 www.TheOriginalHeatherGraham.com
Alaska—the final frontier?
When Clara Avery, an entertainer working on the Fate, an Alaskan cruise ship, goes to nearby Bear Island, she comes across a scene of bloody mayhem. She also comes across Thor Erikson, who will soon be a member of the FBI's elite paranormal unit, the Krewe of Hunters.
Thor's been sent from the Alaska field office to investigate several grotesque killings, with the dead posed to resemble the victims of notorious murderers. The prime suspect is a serial killer Thor once put behind bars. The man escaped from a prison in the Midwest, and all the evidence says he was headed to Alaska…
Thor and Clara share an unusual skill: the ability to communicate with the dead. Their growing love—and their contact with the ghosts of the victims—brings them together to solve the case…and prevent a deadly fate of their own!

My review: Deadly Fate by Heather Graham (Krewe of Hunters #19)

Deadly Fate is the 19th Krewe of Hunters.  Heather Graham is still keeping the stories fresh.

This is full of gore, some of it is fake but some is real.  A reality show is set up on Bear Island with a fake bloody scene to play a prank on some actors. But a real killer adds his own kill to it.  The descriptions are hard to read and imagine.
There are some twists that you might not expect and some that you might guess.
There are some love scenes but if you want are easy to skim over.

Clara Avery is a actress with some othAer actors that first appeared in Haunted Destiny.  Finds a deadly mess. She is on a private island in Alaska.  She is glad when she sees FBI Agent Jackson Crow. Clara finds it hard to accept that now she can see a ghost.  I would freak out too. if a ghost popped up in my room.

Thor Erikson is a FBI Agent from Alaska.  He has a dream about a old case he worked years ago with Jackson Crow his old partner.  So when he gets a weird murder and finds that Jackson Crow is coming to work a case with him he is not surprised.

I like Heather Graham writing.  The touch of ghosts are a fun part of the story.

The setting for this book is Alaska in summer.

I was given this ebook to read for free from NetGalley and Harlequin.  In return I agreed to give a honest review of Deadly Fate.
Posted by rhonda1111 at 5:26 PM