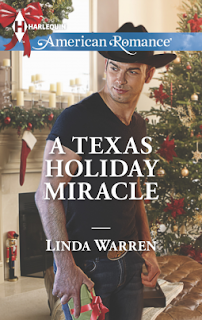 CHRISTMAS IS FOR REAL

Moving to Horseshoe, Texas, to become guardian of her half sister has been rewarding for Lacey Carroll. But raising a six-year-old—especially one who has stopped believing in Santa Claus—has its challenges. Lacey's goal is to bring holiday wonder back into the child's life, which isn't going to be easy with a grinch like Gabe Garrison next door. The man is mean, rude …and hurting.

After losing his son, Gabe shut out the world. But his privacy is invaded by the quirky, dynamic blonde and her kid sister, who are single-handedly filling his solitary life with love. When Lacey enlists him in a holiday campaign for Emma's sake, he can't resist. Will Lacey's unique brand of healing magic make this a season of second chances—for all of them?
Series: Harlequin American Romance (Book 1526)


My review: A Texas Holiday Miracle

Need tissue handy! Linda in front of her book warns that it deals with some sadness and hang in their for the happy ending. Well I cried a lot the first 40% of the book. I personally identified a lot with the characters, I mourned with them and was rooting for them. Lots of drama, trials & tears. Lots of love and miracles that leave you feeling good but wiped out. Their is one love scene that I skipped over.

Lacey Carroll is raising her six year old sister by herself in a new town for her. She gives up her friends, job to take care of her after her father looses the battle to cancer. Her mother does not want Lacey to take her half sister in.

Emma is six. She lost her mom when she was a baby. Now her father lost the battle to cancer. She is scared that she will lose Lacey too. Someone told her Santa is not real. Now she has lost that too.

Gabe Garrison is dealing with the lost of his son. All he does is take care of his son's dog pepper. He gets angry when Emma keeps coming over to his yard and playing with Pepper. Pepper is really sick with cancer.

Lacey is trying her best to be everything for Emma. She is so scared. Lacey wants Emma to get over her anger and have the joy again in her life. Lacey gets angry at Gabe and gets him to look at what he is doing with his life. She is also willing to help him with Pepper.

If you can handle the sadness this book does bring out the joy, helping them to deal with their problems and reach out to others. I liked watching them heal. I would read more books from Linda Warren in the future I just hope they are not so sad. I know I was too close to this book. I lost my husband when my girls were 2 1/2 and 11 months and the anniversary is tomorrow. My dog is 15 years old and I would be surprised if she made it too 16. We all have loved ones that we mourn especially around the holidays. May we help others to heal too.

I was given this ebook to read from Net Galley and Harlequin. I agreed in return to give honest review of A Texas Holiday Miracle.
Posted by rhonda1111 at 2:58 PM