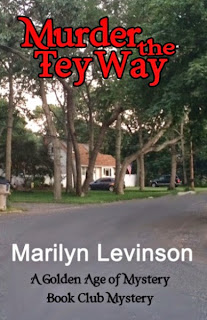 The sequel to Murder a la Christie. The book will be out in mid-October!!

Professor Lexie Driscoll is leading a Golden Age of Mystery book club discussion of Josephine Tey’s novels, when her sister arrives in a state of agitation. The sisters aren’t close, and Lexie wonders why Gayle has driven from Utah to Long Island to stay with her. The following morning, Gayle awakens Lexie to say there’s a dead man lying in her backyard. Gayle confesses she’s on the run because she witnessed a murder and the murderer is out to get her. Gayle takes off after begging Lexie not to tell the police she’s been there. This presents a problem because Lexie’s boyfriend, homicide detective Brian Donovan, is initially put in charge of the investigation. The murder victim turns out to be a minor criminal suspected of having burgled several homes in the area. Lexie wonders if her sister killed the man, believing he was sent to kill her.

Lexie and her friend Joy Lincoln, a former FBI agent and now a stay-at-home mom, soon discover that all of the book club members either have secrets or are in situations involving the wrong side of the law. An older couple, Marge and Evan Billings, are at the mercy of the criminals they’ve hired to extricate their young granddaughter from Peru. Tim Draigon has lost his attorney’s license for illegal activities. He and Sadie Lu, a guidance counselor, owe money and have borrowed large sums from money lenders connected to the murdered man. Lexie’s neighbors, the Roberts sisters, are strange birds. Corinne dominates her slow sister, Felicity, and berates Lexie whenever she comes to Felicity’s aid. And who is this Johnny Scarvino Felicity fears? Another club member is murdered, one is knocked unconscious, and old and new secrets impact the lives of the members of the book club. Lexie must find the murderer before more lives are destroyed. 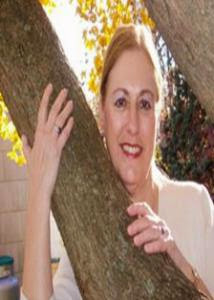 Her latest mystery, Murder a la Christie, is out with Oak Tree Press. Untreed Reads has brought out new e-editions of her Twin Lakes mysteries: A Murderer Among Us, awarded a Suspense Magazine Best Indie, and Murder in the Air. Uncial Press e-publishes her ghost mystery, Giving Up the Ghost, and her romantic suspense, Dangerous Relations. All of Marilyn’s mysteries take place on Long Island, where she lives.

Her books for young readers include No Boys Allowed; Rufus and Magic Run Amok, which was awarded a Children’s Choice; Getting Back to Normal, & And Don’t Bring Jeremy.

Marilyn loves traveling, reading, knitting, doing Sudoku, and visiting with her granddaughter, Olivia, on FaceTime. She is co-founder and past president of the Long Island chapter of Sisters in Crime.


My review: Murder the Tey Way by Marilyn Levinson

This is the second book in the series. The book club discussions are on the mystery writer Josephine Tey. I have never heard of so that was interesting for me. These discussions are very smart and are led by Professor Lexie Driscoll. Almost like a college class with homework just reading the book.

Lexie is hosting the meetings at her house she is renting from boyfriend. Who is working in England for a couple of months. Lexie is also attracted to police detective Brian.

Homicide detective Brian Donovan wants to date Lexie. He is single. He will not discuss police cases with Lexie.

During the first book discussion on Tey a peeping tom is looking into the room. Joy former FBI Agent is the one who sees him and takes off chasing him but lost him. Lexie's sister Gayle showed up but is on the run. Leaves early the next morning after finding a dead body in Lexie's yard.

The dead guy is local handyman and rumor has it works for the mob sometimes. Brian first gets the case.
There are a lot of crimes in the neighborhood lately. It seems everyone in the book club has secrets and relationship to the dead guy.

The novel is very intelligent book. It has a lot of suspects, crimes , drama, romance and is a clean read. Makes me want to try reading one on Tey's mystery for myself sometime.

This is a slower paced book that makes you think. It is a different pace than I have read for awhile. I liked it.

I would read another book by Marilyn Levinson again. I would be even tempted to read the books they discuss in their book club first if mentioned on first page or so.

I was given this ebook to read so I could give a honest book review and be part of Murder the Tey Way book tour.