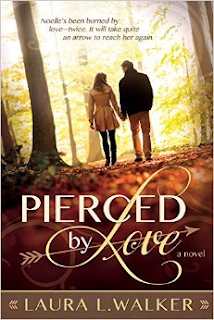 Noelle Jensen doesn’t want to like Pierce Logan. After her boyfriend breaks up with her for her sister, Noelle is done with love. Plus Pierce Logan has commitment issues because of his parents’ divorce and a strained relationship with his dad. But as Pierce and Noelle inadvertently help each other to open up their hearts, they also rediscover the importance of family and love.
Paperback: 224 pages
Publisher: Sweetwater Books (December 9, 2014)
Language: English
ISBN-10: 1462115217
ISBN-13: 978-1462115211

Laura Walker grew up in southern Arizona. She met her husband, Rob, at Northern Arizona University where she earned her bachelor degree in Elementary Education. She and Rob are raising their six children. Her hobbies include water aerobics and sewing. At the end of the day, Laura loves to curl up with a good book or write one of her own. Pierced by Love is her first published novel.


My review:Pierced by Love’ by Laura L. Walker

Boy did I feel a lot while reading Pierced by Love. I was so mad at the characters. Really liked Pierce and was rooting for him.
It would have taken me a lot longer to forgive my sister if I had one. This is full of drama, relationships, forgiveness. Plus it is a clean read. It is a LDS Novel. But is for anyone.

Noelle Jensen is thinking that Chase was getting ready to ask her to marry him. Instead he breaks up with her and gets engaged to her sister. They were sneaking around on her. Blaming Noelle. I was mad at Chase I would not want him to marry one of my daughters especially fast.

Noelle feels really bad. She wants to get over the hurt but it takes time. She feels everyone was keeping secrets from her.

Pierce Logan used to be her home teacher. He lives in the apartment next door. He knows what it feels like to be feeling at odds with your family. He becomes a better friend to her. Pierce never dates one girl for very long. After his parents divorce he is afraid to get close.

Pierce likes Noelle and by being her friend starts to fall for her before she is ready. He is a good friend to her and invites her to go home with him on spring break with his family there.

I would like to read more from Laura L Walker in the future.

I was given this ebook to read so I could give a honest review of it and be part of Pierced by Love blog tour.

Noelle helps Pierce cope with his family and gets along with them.