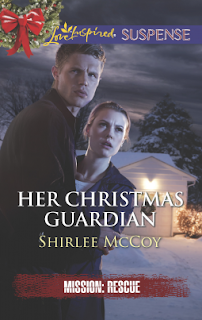 TO SAVE HER DAUGHTER

Former army ranger Boone Anderson immediately senses danger when he spots Scout Cramer and her precious little girl while holiday shopping. Then two cars suddenly give chase in the parking lot —kidnapping the child. His worst suspicions are confirmed, and professional instincts propel him into action. Having lost his own infant daughter years before, Boone is determined to reunite the beautiful single mother and her missing child. But when a secret from Scout's past finally catches up to her, she must work with her self-appointed guardian to save her daughter. Before the kidnappers cancel Christmas for all of them… permanently.


My review: Her Christmas Guardian by Shirlee McCoy (Mission: Rescue #2)

A parents worse nightmare something has happened to your child. Both Boone and Scout have a child missing. Her Christmas Guardian is full of drama, action suspense that will keep you glued to the story.

Scout Cramer and her daughter notice somebody following them. She makes it to her car and cars follow her and take her daughter. Scout is a single mother. She has lived in the same town for three years. Scout has no family except her three year old daughter.

Boone Anderson has had his daughter taken 5 years ago while he was overseas fighting. He can't find his daughter but he helps others reunite with theirs. He notices Scout scared in store and tries to help her. He realizes three cars are following her so he joins in.

This is the second book in the Mission Rescue series. A few of the characters are back to help Scout.

This is a fast read. I wish it was longer story more in depth but it is a good action packed clean story. I hope we get to see more about Boone's past get resolved.

I like Shirlee McCoy's writing style. Will read more stories from her in the future.

I was given this ebook to read by Net Galley and Harlequin. In return I agreed to give honest review of Her Christmas Guardian.