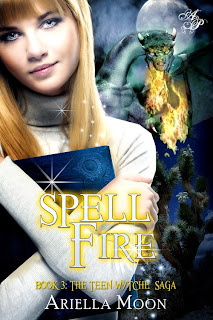 New school. New friends. New reputation. High school sophomore Ainslie Avalon-Bennett works hard to hide her Crazy Girl past. But as long as her best friend’s disappearance remains unsolved, she can’t shake the depression and obsessive-compulsive disorder that once landed her in a mental ward.

Ainslie’s tenuous control over her life shatters when her warring parents ditch her at Christmas. While they take a cruise to “work things out,” Ainslie must spend the holiday in Palm Springs with her aunt and uncle, owners of a struggling Mystery School and occult store. Plunged into the world of fire fortunes, dragons, entity eaters, and an ailing spell book, Ainslie is well beyond her comfort zone. Then she meets a boy who spikes her pulse and calms her OCD. But will she lose him once he discovers her past? Or will his deadly secret, hidden in plain view, be their undoing?

Spell Fire is the third book in The Teen Wytche Saga. It almost seems like a whole different series for most of the book. All new characters except for a chapter or two later in the book. Different high school setting and then it goes to Arizona
for the rest of story. It also has more of a new age, fantasy angle to the book.

Spell Fire has a new main Character of Ainslie. Ainslie has had a break down when her best friend disappeared from her foster home. She still has trouble but better. She gets depressed, obsessive compulsive disorder. She is way smart. She is likable and different.

Ainslie gets sent to her Aunt and Uncle in Arizona for three weeks. They own a Mystery School and occult store. She finds herself in a world of fire fortunes, dragons, demons and she runs into a damaged spell book. She finds some help along the way too.

I could not wait to find what Ainslie would run into next. She also meets two boys through the store who have different talents.

The new age stuff, was a little out there for me to understand and believe in. But it made a good story

Though I liked the fire fortunes part. I liked the ending of the book. Also laughed at Ainslie's Christmas presents from her new friends. I also liked how Ainslie's smarts helped her Aunt and Uncle with marketing ideas. It is also a clean read.

I can't wait till I read the next book in the series. I will have read all four of the books this week.

I was given this ebook to read by it's author so that I could give Spell Fire a honest review of it.