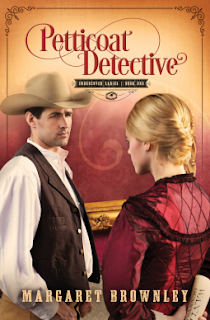 Pinkerton detective Jennifer Layne is no stranger to undercover work. But posing as a lady companion named Amy at Miss Lillian’s Parlor House and Boots is a first for her. She’s finally landed a high-profile case and is on the trail of the notorious Gunnysack Bandit, when one of Miss Lillian’s girls essential to her investigation meets an untimely demise. Only a handful of people are in the house at the time of her death, including handsome Tom Colton, a former Texas Ranger determined to clear his brother’s name. Amy has many reasons to suspect Tom of murder and one very personal reason to hope that she’s wrong about him.
Series: Undercover Ladies (Book 1)

I thought this book entertaining. It was funny, romantic, western, Christian and mystery. I was guessing wrong on who I thought was the thief. I like the characters especially Jennifer/Amy.
The scene where they catch the bandit was so funny. I don't want to say anything else about it so I won't give it away.

Jennifer is a Pinkerton detective agent. She has to go undercover as Amy in a upscale red light business. She learns some important lessons about judging that we all do. She has a problem with modesty and holding her beliefs in. Jennifer is tired of reaction she gets about being a lady detective.

Tom Colton is following a lead about his brother's murder and leads to Rose at Miss Lillian’s Parlor House and Boots. He is their when she is murdered. He hates being their. He is attracted to Amy but fights it hard. Tom used to be a Texas Ranger. He is raising his nephew now on a ranch.

Most of the women working for Miss Lillian are their because they have no other way to make money. There was not a lot of options back then.

Some of the church ladies were really mean. Others were nice and wanted to really help. Just like some of the guests at Miss Lillian's were married men. In any group you will find both mean and nice. Those who say one thing and act another. It is really easy to judge and blame others.

I thought the book did a good job with the mix of church ladies. Also with the bible scriptures it all fit in really well with the story.

I will look for more books in this series to read in the future. I am really curious about it now.

I was given this ebook to read by Net Galley and Barbour Publishing, Inc. In return I agreed to give honest review of Petticoat Detective.
Posted by rhonda1111 at 1:24 PM