Blog Tour: A Far Gone Night by by John Carenen 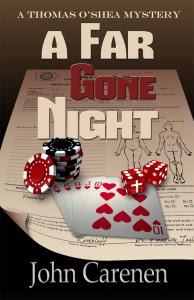 Suffering from insomnia, wise-cracking tough guy Thomas O’Shea goes for a late-night stroll through the peaceful streets of Rockbluff, Iowa, and finds himself pausing downtown on the bridge that spans the Whitetail River. When he glances downstream, something catches his eye…something that looks like a body. He scrambles down to the riverbank, pulling the body of a young girl from the water. The girl is naked, with two bullet holes in the back of her head. Ever suspicious of law enforcement, O’Shea chooses not to mention the bullet holes when Deputy Stephen Doltch, on routine patrol, discovers him at the river’s edge.
When the coroner’s report lists the cause of death as “drowning,” Thomas confronts the coroner, but his questions are met with hostility. Then the coroner and his wife disappear, along with the body of the dead girl.
Teaming up with his friend Lunatic Mooning and Clancy Dominguez, an old buddy from his Navy SEAL days, Thomas and the other two men join together to bring justice to the dead girl, a quest that takes them to the Chalaka Reservation in Minnesota, seedy businesses adjacent to the Chalaka Casino, and straight into the world of organized crime.
A fast-paced story, laugh-out-loud moments and familiar, quirky characters from Carenen’s debut novel, Signs of Struggle, continue to enliven the complex world of Thomas O’Shea. Once again, Thomas gears up to find answers that will reveal who put the bullets in the girl’s head, why she was killed, and her identity, which may hit a little too close to home… 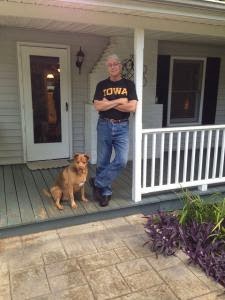 About This Author
John Carenen, a native of Clinton, Iowa, graduated with an M.F.A. in Fiction Writing from the prestigious University of Iowa Writers Workshop and has been writing ever since. His work has appeared in numerous popular and literary magazines, and he has been a featured columnist in newspapers in North and South Carolina. A novel, Son-up, Son-down was published by the National Institute of Mental Health.
His debut Thomas O’Shea mystery novel, Signs of Struggle, was published in October of 2012. A Far Gone Night, the long-anticipated sequel, continues the exploits of the enigmatic protagonist and the quirky characters of Rockbluff, Iowa.
John is currently an English professor at Newberry College in Newberry, South Carolina. He and his wife live in their cozy cottage down a quiet lane in northern Greenville, South Carolina. He is a big fan of the Iowa Hawkeyes and Boston Red Sox.


My review: A Far Gone Night by by John Carenen
4 STARS
A good story with lots of drama, violence and action.  Reminds me a little like Terrell H Griffen books.  I like the characters. I like that they try to give justice even if they don't do it by the book.

Thomas O’Shea is the main character.  He worked in the past for the government Black Ops.  He lost his wife and two daughters.  He is curious and has skills to back him up.  On one hand he can be full of violence and on the other hand he is a Christian.

One night while he couldn't sleep as he was walking downtown and crossed a bridge he saw a body in the river.  He ran down into the river and was able to get her out.  While he was moving her he felt two bullet holes in her back of head.

The cops and coroner call it drowning. Thomas knows that is not right.  He starts to look into it and the coroner and his wife disappear with all the evidence including the body of the 15 year old girl.

With his two friends Lunatic Mooning and Clancy Dominguez,  help they go to seek justice for the girl and it leads them to the Chalaka Reservation in Minnesota.

Thomas says a lot of the same things a lot like he likes when a women winks at him or pat his but.  He is ready to like someone knew but she is not ready for his life choices.  He likes to drink a lot to me.

I would not mind reading the first book in the series or future books about Thomas O'Shea.

I was given this ebook to read and in return agreed to give honest review and be part of A Far Gone Night book tour.

Thank you so much for sharing!