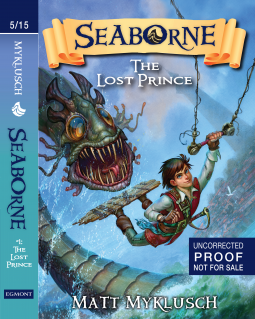 When thirteen-year-old Dean Seaborne runs afoul of the Pirate King, he is given one last chance to redeem himself before he gets thrown to the sharks. His mission? Find and steal the treasure of Zenhala, a mysterious island where gold grows on trees. Dean infiltrates the island, posing as its legendary lost prince, but the longer he stays in Zenhala, the more he questions his mission—and himself. Forced to undergo intense and fantastical trials to prove his royal lineage, Dean can’t help but wonder if he really is the lost prince he’s pretending to be. With sea serpents, assassins, and danger on all sides, he might not live long enough to find out. 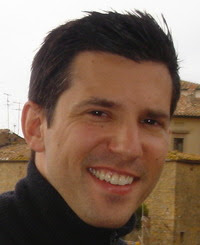 Matt Myklusch is the author of the Jack Blank Adventures, a middle grade trilogy published by Simon and Schuster, Aladdin. All three books: THE ACCIDENTAL HERO (2010), THE SECRET WAR (2011), and THE END OF INFINITY (2012) are in stores now.


My review: Seaborne #1: The Lost Prince by Matt Myklusch

This is a exciting adventure, with pirates, a fabled island where gold grows on trees, trials to prove worthiness of royal, and pirate battle. You don't want to stop reading. You can never guess where the story is going to go next. It is also a clean read.

The characters are a good mix of bad guys you hate, bad guys that you love to root for and some you just love. Dean Seaborne is the main character that the story centers around.

Dean is 13 year old. He tried running away from the Pirate King. He is almost fed to the sharks.
He is given one more chance to find out why Gentleman Jim has been sending less money to him.
Dean gets taken on with Gentleman Jim. He is only their a short time but his ways rub off on Dean.

One-Eyed Jack the Pirate king. He is feared by plenty. The pirates pay him a tithe. He does not care who he hurts or kills.

Gentleman Jim Harper captain of the Reckless. He only robs those who can afford it. His crew are all children. He does not harm anyone if he can help it. They scare them. Most of his crew are loyal.

Ronan is first mate on the Reckless. He is smart, big and does not give up.

The setting for this book is the Caribbean and Bermuda Triangle.

The adventure draws you in from the first chapter. The story is fast paced. It is creative. I liked the sea monsters or at least one of them.

Dean's life is at risk for most of the book. Some of his enemies are known others you are not sure of till they are revealed.

The target audience is 8 to 12 years old. I think a lot more will like it. I loved it and I am a lot older. My 23 year old daughter loved it too. I think fans of Ranger Apprentice, Percy Jackson, Brotherband, and Harry Potter will like it too.

I was given this ebook to read by Net Galley and Egmont USA. In return I agreed to give honest review of it.