Heir to Murder by Elle James (The Adair Affairs #4) 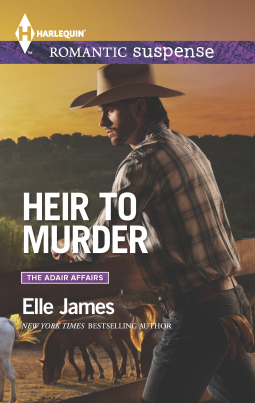 In this thrilling conclusion to The Adair Affairs by New York Times bestselling author Elle James, the long-lost Adair heir is finally revealed!
Thanks to a DNA test, ranch hand Noah Scott discovers he's heir to a billion-dollar fortune. Now an Adair, Noah must come to grips with his true identity and the shocking murder of his real father. Then he discovers that the one woman he thought he could trust was spying on him for his siblings, and he cuts Rachel Blackstone out of his life.
But his father's killer has never been caught… With all those close to Noah targets—including Rachel—Noah needs to set a dangerous trap…using himself as ultimate bait.
My review:  Heir to Murder  by Elle James  (The Adair Affairs #4)
Finally find out who the murder is.  Lots of drama, action, betrayal and sex in this last book of The Adair Affairs.  I have missed the third book of the series.
It is official that Noah is really the kidnapped Jackson Adair all grown up.  Noah does not know who to trust now that he has realized that he has been lied to all his life.  He thinks Rachel is the only one he can trust now.
Rachel has been keeping her own secrets from Noah. She tries to tell him.  When Noah finds out he leaves. Rachel then is almost run over.
Their is so much betrayal that everyone is afraid to trust each other.  Especially when it was family that had taken Jackson years ago.
Who is trying to kill Rachel and  Ruby now?
Ruby has finally found her son.  How hard would that be to have your child kidnapped?  Her in-laws did not accept her and took the baby away.
It is full of emotional baggage,  as everyone comes to realize who they can trust and try and protect those who are in danger now.  Lots of love scenes.
I was given this ebook to read by Net Galley and Harlequin.  In return I agreed to give honest review of Heir to Murder.
Posted by rhonda1111 at 11:00 AM