Chatterbox :Surrendering to the Sheriff (Sweetwater Ranch #7) by Delores Fossen 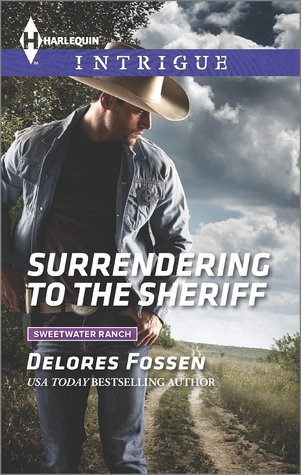 Discovering Kendall O'Neal being held at gunpoint at his ranch isn't the homecoming sheriff Aiden Braddock expects. And now Kendall's captors are demanding he destroy evidence in an upcoming trial in exchange for the Texas attorney's life…
And the life of their unborn baby.
Three months ago, Aiden and Kendall gave in to their long-simmering attraction. Now, with a child on the way, the stakes have shot sky-high. But even after he pulls off a daring rescue, Kendall isn't safe. Before long, they find temporary haven in each other's arms—which could be even more dangerous than facing down a killer.
My review:  Surrendering to the Sheriff (Sweetwater Ranch #7) by Delores  Fossen

I have read most of this series and this answers some questions but still leaves the big question unanswered. Surrendering to the Sheriff is jam packed with suspense, action, mystery.  You are kept guessing what is going on and who is behind it.  Every time you think they will get the answers something else happens to muddy the water and keep you glued to the story to find out.

Sheriff  Aiden Braddock comes home and realizes something is not right.  He finds Kendall O'Neal on his front room floor with two masked gunmen threatening to shoot her if the Sheriff does not take there phone and video himself destroying evidence in a case.

Aiden wonders if Kendall part of a setup.  The evidence is proof of his father murder 23 years ago and will be used against Kendall's half sister Jewell's trial.  Aiden tries to pull off that he does not care for Kendall and her family.  The bad guys know something Aiden doesn't.  Kendall is pregnant with his baby.

Kendall is a lawyer.  Her half sister raised her and is now in jail waiting trial.  Kendall has liked Aiden since there first kiss right before he knew his dad was murdered.  After a night of both drinking hard they had a one night stand.

I know I am going to read the next book of the series by Delores Fossen.  I want the answers to all the questions.

I was given this book to read by Chatterbox for free.  In return I agreed to tell people what I thought of Surrendering to the Sheriff A Harlequin Intrigue novel.