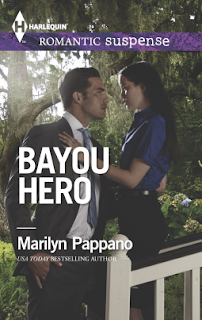 Description
In this book from USA TODAY bestselling author Marilyn Pappano, one family's scandal is responsible for a rising body count…

Even for an experienced NCIS agent like Alia Kingsley, the murder scene is particularly gruesome. Someone killed in a fit of rage. Being the long-estranged son of the deceased, Landry Jackson quickly becomes a person of interest. But does Landry loathe his father as much as the feds suspect?

It's clear to Alia that Landry Jackson has secrets, but his hatred for his father isn't one of them. Alia feels sure Landry isn't the killer, but once more family members start dying, she's forced to question herself. What if the fierce attraction between her and Landry has compromised Alia's instincts?
Series: Harlequin Romantic Suspense (Book 1832)

My review:Bayou Hero by Marilyn Pappano

Bayou Hero is a good murder suspense romance. I did figure out who and why pretty fast in the story. Also why now.
The cemetery scene was very creepy. The idea that you can't bury anyone else in family tomb for a year and a day. Then they sweep the bones to far back. I missed what they did with casket? There was also a lot of blood and gore. Considering I am reading this a week before Halloween is fitting but for Jan. You decide.
The romance of the book started out pretty fast. I admire that Alia did not try and hide it but did the right thing. There is one love scene that I skipped over.

I like Alia and Landry. The contrast between the two different styles of families with the fathers both rear admirals when retired. How Alia was raised all over as a Navy brat compared again how Landry's family did not go with his father on his different tours. Also how their mothers were opposites too.

Alia is with NCIS. Divorced who is working the case with her ex-husband.
Landry is a bar tender. Never married.

The setting is New Orleans.
I would love to have Alia ability to eat like she does and stays in good shape. I would love to try some of the food they talk about in the book it sounds delicious.

I would read another book by Marilyn Pappano in the future.

I was given this ebook from Net Galley and Harlequin to read so I could give a honest review of Bayou Hero.