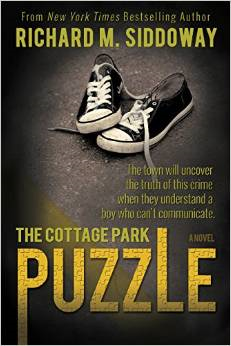 About the book:
When two teenagers are found beaten in the quiet town of Cottage Park and another boy is standing over them holding a baseball bat, it seems like a simple task to convict the perpetrator. There’s just one problem: he’s autistic. This poignant tale of one town’s journey to forgiveness and love will stay with you long after you’ve finished reading.

EXCERPT:
Corky let out a screech from the family room bringing her back to the present. He was tented underneath the overturned rocking chair watching the television set from the corner of his eye. A program was just ending and he was transfixed by the credits that rolled by. Lorraine knew better than to interrupt the credits—for some reason Corky loved to see them although he paid little attention to the programs themselves. At last they ended and a commercial replaced them. Corky wiggled out from beneath the chair, righted it, sat down, and began to rock.
“Come on, big guy, let’s get you into the tub.”
He ignored her and continued to rock back and forth.
Lorraine took Cork’s hand in hers. “Bath time,” his mother said.

He rocked a few more times then launched himself from the chair and ran squealing down the hall to the bathroom with his mother following behind. She turned on the water and began to help Corky out of his clothes. He’d chewed a hole through the top of his blood-soaked shirt and somehow during the day had managed to get his pants on backwards. As soon as Lorraine started pulling his shirt off, Cork squirmed like an eel and pulled it over his head. When he was younger they had to watch him like a hawk or he pulled off all his clothes and ran naked out of the house. At least that hadn’t happened for a few years. He peeled off his shoes, sank to the floor and stuck his feet in the air. Lorraine massaged them while the tub filled. He loved to have his feet rubbed.
When she reached past him and turned off the water, Corky leapt to his feet, peeled off his pants and his underwear, and jumped into the tub. Water splashed everywhere as he let out a satisfied moan. He placed his feet against the end of the tub and pushed himself back and forth, sending waves onto the floor. Without even thinking about it Lorraine pulled the extra towels she kept in the linen cabinet and dropped them next to the tub. It was standard operating procedure with Cork’s baths.
She left Corky soaking in the water, picked up his clothes, and dropped them into the washing machine. “I don’t know if the blood will come out,” she shuddered.


My review: The Cottage Park Puzzle by Richard M. Siddoway

The Cottage Park Puzzle makes you feel involved with the characters.  I kept putting myself as the mom of the different boys and think what would I do or react if that was my son.  Who knows what we would do or say.

Two boys are found at school unconscious having been beaten by a third boy covered in blood. The fourth boy Scott said he found Corky with the baseball bat hitting the boys.

Corky does not talk. He is autistic. Has not shown violence before.  Corky goes to special needs at Cottage Park JuniorSenior High School. His parents are sick with the idea he hurt two kids. They worry over the boys and pray for them.

The Principal Karen Porter wants to expel Corky. Does not think he is safe to be around the other children.

No one really knows what happen to set Corky off. No one saw anything. Scott and then Tony Smutz the assistant principal arrived and called 911.

Everyone is in a rush to judge and want immediate action. The town takes sides. Lots of anger , worry over the two boys. Their moms are angry. One is threatening lawsuits. The police sent Corky home with his mother Lorraine because of his special needs.

Most of the book is fast paced and happens in a weeks time. We see this happening more and more as people rush to judge and punish before all the facts have a chance to come out.

What should happen to a boy that does not understand like everyone else? Through his teachers Corky has made leap and bounds progress. He has become potty trained, not to rush off alone things other children learn as toddlers. But Corky is now 6ft 200lbs. He does not communicate. Should he be locked up behind bars? Should his parents be punished?

I don't know the answer what should a dangerous person who does not understand have happen to him.

I liked the story, the characters, how some of the characters forgave others that did them wrong.  All the parents had to forgive someone and be forgiven for their actions. What they all said in the heat of the moments. I need to learn this lesson of forgiveness and ask more to be forgiven.

I was given The Cottage Park Puzzle to read so I could give a honest review of it and be part of it's blog tour.