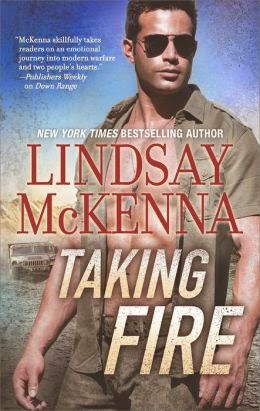 She dances on the edge of life… and death

Not all are meant to walk in the light. Marine Corps Sergeant Khat Shinwari lives among the shadows of the rocky Afghani hills, a Shadow Warrior by name and by nature. She works alone, undercover and undetected—until a small team of US Navy SEALs are set upon by the Taliban… and Khat is forced to disobey orders to save their lives.
To go rogue.
Now, hidden deep in the hills with injured SEAL Michael Tarik in her care, Khat learns that he's more than just a sailor. In him, she sees something of herself and of what she could be. Now duty faces off against the raw, overwhelming attraction she has for Mike. And she must decide between the safety of the shadows… and risking everything by stepping
ISBN-13: 9780373785056

Taking Fire is a action packed, war romance rolled  into one book.  There is so much drama you don't want to put the book down. Strong characters who you come to care about.

Khat is such a strong brave caring woman.  Khat saves lives and she also can take lives. She has lots of secrets. She was born in the US but her father is from Afghan.

Michael Tarik is a Navy Seal.  While out with his unit he is separated and wounded.  Khat sees that they are walking into a trap and as a sniper starts taking out the Taliban soldiers.  Michael is unconscious.  Khat is able to get him to her camp in a cave and gives him first aid.

Khat does so much to help the Afghan villagers in her area.  She gives them clinics.  It makes you realize how much as a American we take for granted.  Simple doctor visits, medicines, water.  I learned a lot. Never picture red heads as a Afghan.  In one scene Mike gives a villager $400 and they mention that it could feed the village for a year on that amount.

The setting for Taking Fire is Afghan.  Mostly in the mountain area.

I was given Taking Fire to read and in return I agreed to give honest review of Taking Fire.